In 2017, off the back of the boundary reviews in Scotland, I wrote an article for LGiU concluding that no matter how we feel about our own boundary reform processes we can all be grateful that none of our wards look like lobsters. This was obviously a reference to Ward 2 in the City of Chicago, a casualty of its neighbouring wards being gerrymandered to within an inch of their lives and the sinewy leftovers being strung together into a ragged mess resembling a clawed crustacean, electoral parity and community cohesion the furthest concepts from the minds of the factions of incumbent local politicians who battled each other in council backrooms to get the map passed with the coveted public engagement level of Zero. 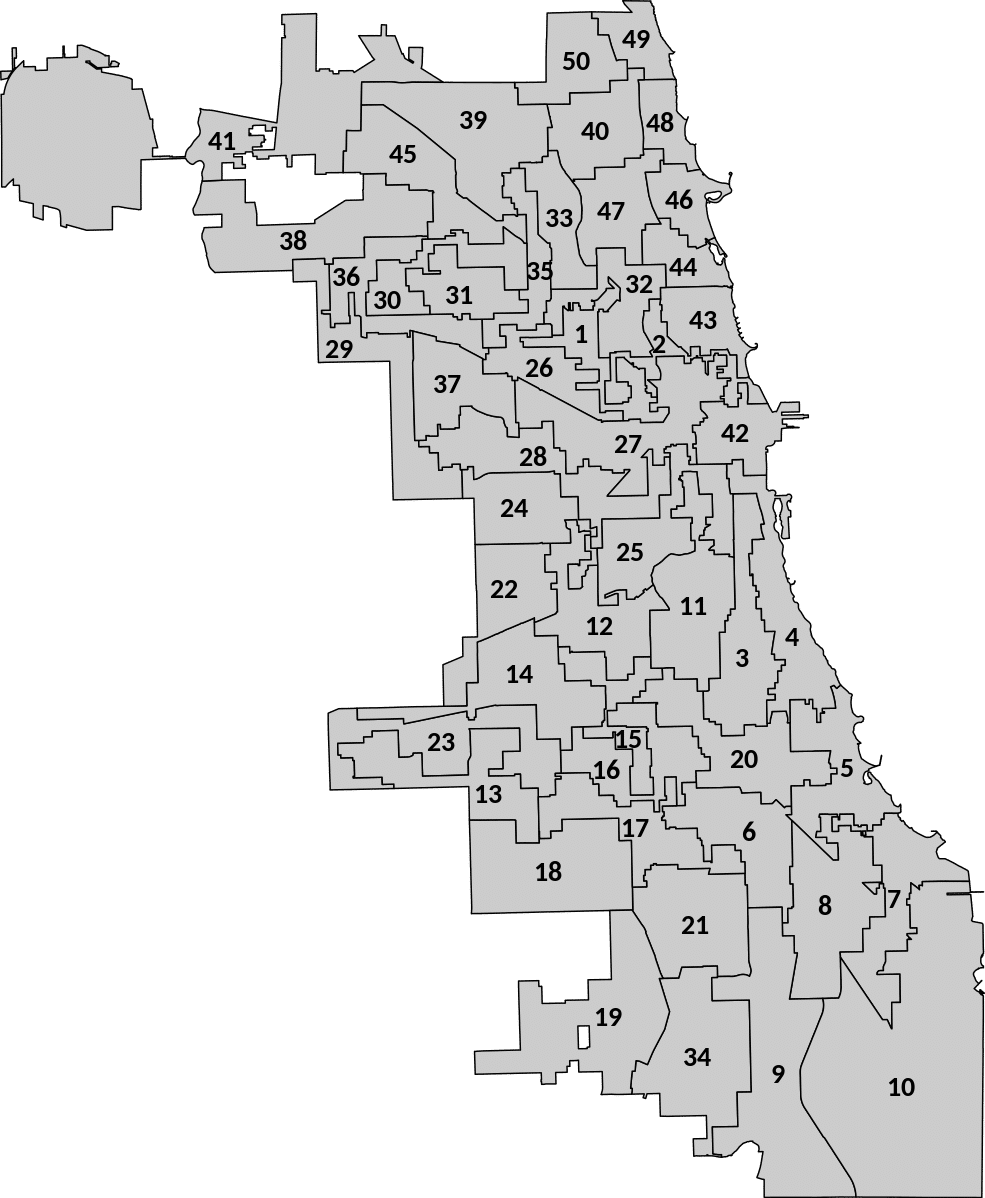 And boundaries matter. The Covid-19 pandemic made the impacts of dodgy districting very apparent and the citizens felt it. It wasn’t hard to connect delays in testing, slow vaccination rollouts and communities struggling to access basic resources to fragmented representation and blurred neighbourhood accountability. A 2018 study into the real world effects of gerrymandering in the city also found increased violence in affected areas due to sections of communities being isolated from access to policing and social services.

It’s now 2021 and the notorious and highly politicised remapping process is upon us again, with a new map dividing the city’s 2.7 million residents into 50 roughly equal wards to be agreed on by aldermen by December 1st (or face the dreaded referendum). Let’s find out if a visibly poor pandemic response, a new liberal Mayor, ten years of ridicule over the state of the last attempt, unprecedented delays in census data AND historical remap ringleader Alderman Ed Burke being sidelined awaiting trial on corruption charges has triggered any changes to the way Chicago sets its ward boundaries.

We can rule the Mayor out as a changemaker straight away. In her 2019 campaign for election, Mayor Lori Lightfoot pledged to establish an independent commission that would have responsibility for redrawing the map, but since taking office has failed to do so, or even to endorse any of the attempts to create such a commission. Mayor Lightfoot found herself facing a whole lot of pushback from the Latino Caucus and the Black Caucus who had concerns that independent voices in the process would dilute their influence on the city council. And she yielded. Disappointing, but since the remap is generally seen as an opportunity for mayors and dominant groups of aldermen to consolidate power and maximise chances of re-election, not wholly unexpected (in fairness she did win every ward in the city in the mayoral election so power is not necessarily her angle here).

Proving mayoral support to be a nice-to-have rather than a must, a diverse coalition of community groups in the city created the Chicago Advisory Redistricting Commission – led by Chicago residents and fully independent of the city council – to draw up a ward map “by the people of Chicago, for the people of Chicago” and give Chicagoans back control over their spaces and communities.

A selection committee of diverse and independent Chicagoans selected the commissioners from a pool of 374 applicants from across the city who applied through an open online application process. They started with a blank map and from June, in over 40 online and in-person hearings, the commission invited residents to submit proposals, sample maps, testimony and other feedback about how they felt their communities would be best represented within the 50-ward structure. When the census data was delivered in August, the commission incorporated this into their mapping considerations, and on October 1st, the final version of their map, named The People’s Map, was approved by public hearing.

The resulting map reflects efforts of the commission to keep neighbourhoods together, with the ultimate aim of making it easier for residents to get their voices heard and for them to engage with local public services.

It may be the first map by an independent commission to be filed with the City Clerk’s Office, but the fight for non-incumbent influence on the ward boundaries has only just begun. To stand a chance it needs at least ten sitting council members to vote for it, which then will trigger a special referendum where all the proposed maps are considered by the Chicago public. Ten votes out of fifty may not seem like a lot, but the political context here is fragmented, full of complex alliances and decision making ultimately comes down to race and power. Voting for the map would require incumbent politicians to essentially give away control they have over who their voters are, and in Chicago that’s a hard sell. The Lobster Map managed to get through the process – and avoid the pesky public vote – with a super convenient 41 votes to 9.

The other maps in the running are drawn with the primary goal of creating majority ethnic wards. While this does ensure representation on the city council (if the wards actually end up achieving their parity targets), the process prioritises political power over equality for citizens and over governability. This year, the map submitted by the Black Caucus preserves all 18 Black majority wards in the city – which is what they set out to do. The map submitted by the Latino Caucus contains two new Hispanic majority wards at the expense of Black majority wards. The map includes 15 White majority wards and also creates an Asian-majority ward for the first time (as did the People’s Map actually). This reflects the city’s changing demographics based on the new census data, but has created more political tension in an already fraught space.

Local politics in Chicago is hugely convoluted and I will never understand it enough to conduct any sort of useful critique but I will question whether having majority wards at the expense of community cohesion is the only way to ensure that all of Chicago’s ethnic groups are represented on the council? It’s absolutely possible that there are other mechanisms such as changes to the local electoral system (quotas, lists etc?) that could be implemented to ensure representation without carving up neighbourhoods and rendering whole sections of the city ungovernable and without the adequate service delivery to fulfil the citizens day to day needs. Whether there is the political will for that is another matter.

Anyway, the independent commission is a good start but beyond that the process remains much the same as it was back in 2011. Check back with us in in Q1 of 2022 for an update on the outcome of the council’s vote, whether the People’s Map got the 10 votes it needed to disrupt the process, some analysis on what the map chosen in 2021 means for local governance in Chicago for the next ten years, and maybe even some wild guesses about whether it looks possible to ever steer local politics in Chicago away from power and towards service delivery.

On September 6, First Minister Nicola Sturgeon announced the Scottish Government’s new Programme for Government (PfG) 2022-2023. This briefing will summarise key points of this announcement and highlight the parts most relevant to local government and public services.

Collaborative planning partnership model for the growth of Western Sydney

This briefing shares valuable insights on planning partnerships. It will be of interest to councillors, CEOs, senior executives, and those interested in questions of governance, subsidiarity, and urban policy.