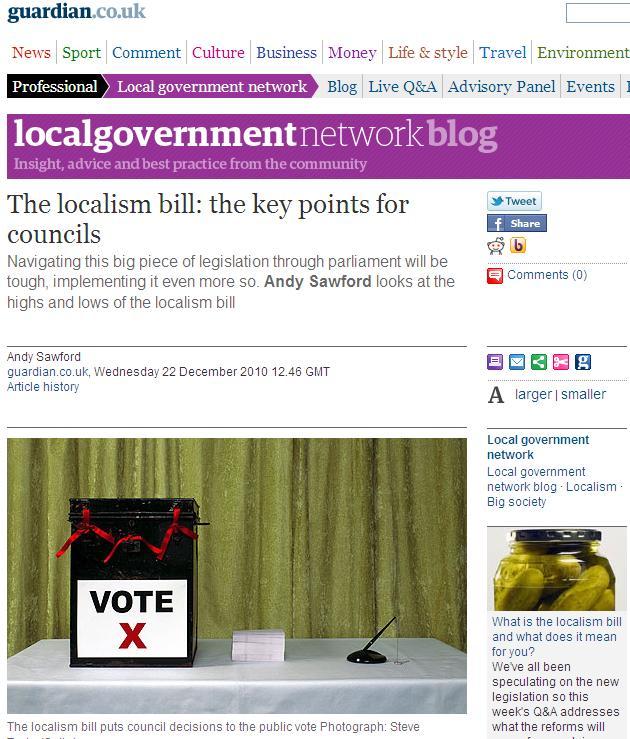 This article was origianlly publish on the Guardian website

A massive piece of legislation announced alongside a huge cut in funding for local government, the localism bill will have a big impact on local councils and communities. Looked at carefully, it’s clear the bill provides practical reasons to believe that the relationship between citizens and the national and local state will have to change.

Public expenditure cuts will be real and deep. They will start this year and continue for the remainder of the parliament, and the spending cuts for councils are severe. There are, however, some reasons for optimism. The localism bill contains many measures that councils will welcome.

The proposed new general power of competence is a bold statement in law. It is also a challenge to councils to move on from the parent and child relationship it has had with central government in the past, always looking for legislative permission and Whitehall guidance. In theory, council’s will be legally free in future to do whatever they think is in the interests of their community. However, in the detail of the bill there are many qualifications and limitations on how councils may use the power. It may be that the big test comes in the courts.

One very clear limitation is around finance. The bill proposes new council responsibilities to publish data about public spending, including senior salaries. In theory the government says that councils can raise more money locally, but this will be subject to a referendum. Yet this approach looks like double standards from Whitehall, where the chancellor exercises huge powers to vary, at a stroke, the tax we pay from one year to the next, without being subject to a referendum. I’m left wondering why their electoral mandate is considered a democratic basis for national politicians to govern but not for local politicians.

The ‘people power’ elements of the bill gives the community the right to challenge the council over the provision of local services, and a new right to bid to buy local assets such as libraries, pubs and shops. There are of course many examples of this kind of community challenge and involvement, but we must ask what will motivate more people to want to take over services or assets rather than have the council deliver them.

Similarly when community groups do get involved, how will we ensure that they are properly supported and that they are accountable in respect of service standards and use of public money? The government will want to achieve this without reintroducing what it sees as the deadening hand of the state, but the role of local government and of elected local councillors will be crucial.

The bill contains many more elements, from reform of housing and planning with what is called a more “community led” approach, to changes in London governance.

One particular proposal that will create controversy is the push to create more directly elected mayors in major cities. There is already provision in law for communities to opt for an elected mayor but of the 37 referendums that have been held in the last 10 years only 13 have voted in favour. By triggering referendums, the government risks the same outcome as John Prescott’s ill-fated vote in the north-east for regional government. People will only vote yes to a mayor if they can see clear advantages. To encourage support for the model, mayors are to be given new powers, but only if Eric Pickles can convince his cabinet colleagues to hand them over.

Given its size and significance, navigating this bill through parliament will be a tough job for Pickles. Implementing it in communities, particularly at a time of budget cuts, will be even tougher for councils.