There is perhaps no local issue that unifies political parties so much as the pothole. (Particularly if you’re sitting in opposition). No one likes them. Everyone thinks they should be filled more quickly. And there’s no easier way for a local politician to grab a few column inches than by grimly pointing at a pothole. In fact, a whole blog, anonymous, hilarious and now defunct was dedicated to Glum Councillors   who were mainly glum about potholes and the odd bit of fly-tipping.

Not only are potholes politically notorious, they’re also lyrical inspiration. Chanteurs from Willie Nelson to Jay-Z have sung references to potholes and hole songs (see what I did there?) have been dedicated to potholes and the Irish seem to find them particularly worthy of musical composition.

2018 might well be declared the Year of the Pothole. The Beast from the East and other inclement weather in the first part of this year created the perfect conditions for the formation of potholes and damaged road surfaces that can become potholes throughout this year.

So how exactly do potholes form?

Paved roads have a surface of asphalt and a subsurface of compressed gravel – but of course this can vary across – with different thicknesses of asphalt and sub-surface – and sometimes different compositions of road surface – such as concrete for high volume and high speed roads or when you really want to get fancy – concrete and asphalt.  However, 95% of the UK’s road network is surfaced in asphalt.

No matter how good your road surfacing is, eventually cracks will appear. The simple truth is that no road surface is permanently durable. Once the surface is cracked then it becomes easy for water to seep into the ‘unconsolidated’ subsurface, when temperatures drop below freezing the ice expands into the voids creating larger voids and damaging the surface more. Add more water and more traffic and hey presto – potholes. 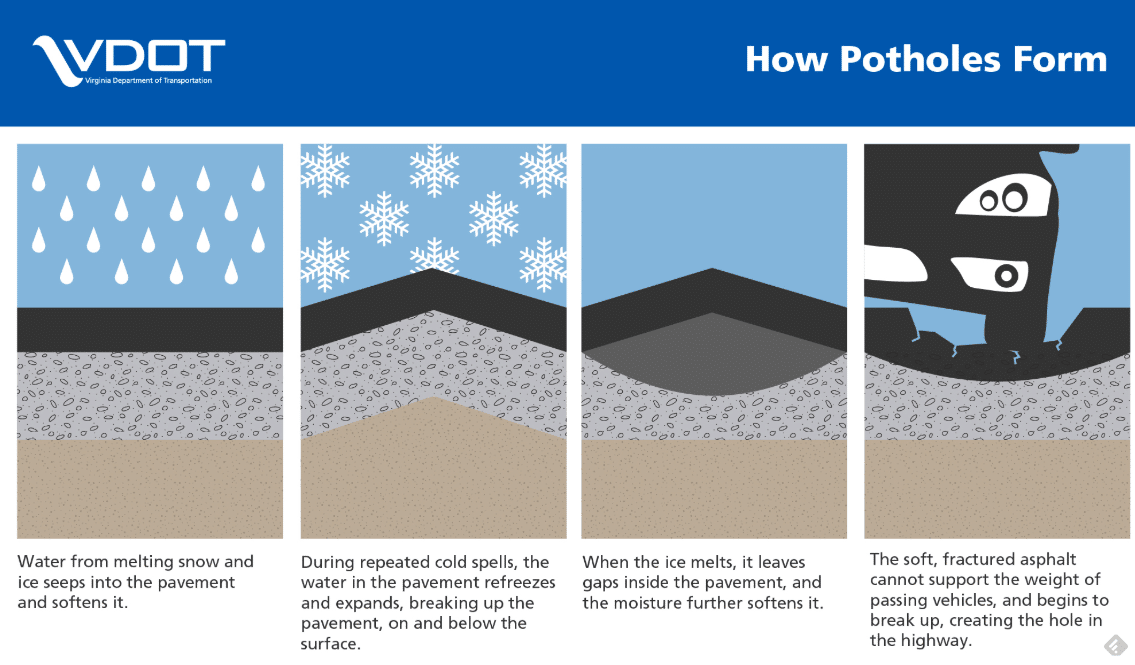 Diagram courtesy of the Virginia Department of Transportation.

Some road surfacing is pretty darn durable but very expensive. It’s almost certainly not worth putting in concrete roads in residential areas. There will always be a trade-off between durability, resurfacing costs and patching up the holes and cracks. But increasingly councils are facing the trade-off between repairs and payouts to motorists whose cars have been damaged and cyclists who have been injured or even killed.

While local authority spending has increased on major roads, minor local roads have seen less investment.  Some councils, have slashed highways budgets by over three-quarters, such as Newcastle-upon-Tyne – as the overall financial strictures means that councils have diverted money away from roads (for example) to avoid cuts to services like adult social care. Despite a recent government pledge to increase money for the road network including a pothole repair fund and some estimate that around £10-13 billion is needed to bring the road network up to scratch.

While overall spending on roads may be falling – payouts are increasing. Local authorities paid out £7.3 million in compensation in 2017 – a half million more than in the previous year – and judging by pothole complaints that figure is set to rise.

So what’s a councillor to do?

Sir Richard Leese, Leader of Manchester City Council, has advised drivers to be more careful and not to raid highways maintenance budgets for compensation. He told the Manchester Evening News: “The idea that councils have to take responsibility for every bit of people’s activity can’t be right – or the fact that council services, including the limited money we have to repair roads, should be put at risk. I’d say what people need to be doing is driving more carefully.”

Councillor Roy Owen, a former highways worker, and now Independent councillor in Gwynedd is taking it on himself to fill potholes in his own ward – but not every councillor has this skillset*.

Other than posing for the local paper with a glum expression and a finger pointing toward the earth, councils need to advocate more strongly for fairer and more responsive funding system for local services. Our member-driven finance task force is looking at ways to do that.

* we provide many training opportunities for councillors, but this one isn’t (yet) a part of our Learning and Development offering.