Here’s your round-up from the LGIU team with what you need to know about the local election results across Scotland. This is all part of our one-stop shop for essential elections support, resources and commentary.

If you’ve just been elected, LGIU’s resources for new councillors has everything you need to hit the ground running.

The overall picture in Scotland

SNP has delivered a strong performance in 2022. The election has seen Conservatives lose a substantial number of seats compared to their performance in 2017. Labour are now in second place behind SNP in terms of the total number of councillors. All main parties, Labour, Green and Liberal Democrat have gained seats. Overall turnout has been strong, something commentators felt would benefit SNP, and this looks to be the case. 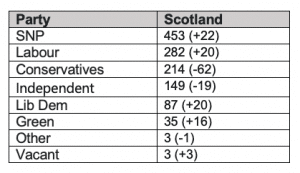 The results hide a considerable amount of complexity amongst the winners and losers, by seat, ward and council area. The biggest question now (aside from two councils) is who will be in coalition with who? From Perth and Kinross to Aberdeen, many meetings and discussions will be had over the coming days and perhaps weeks. The first council meetings will take place towards the end of this month.

With strong results across many areas of the country the SNP has increased its number of councillors by 22 to 453. This result means that they remain the largest party in Scotland. However, Labour have gained 20 seats and had a strong showing in key Council areas including Glasgow and West Dunbartonshire. The Greens have had a good election, almost doubling their total number of Councillors to 35 while the Lib Dems have won an additional 20 seats.

This election was always going to be tough for the Scottish Conservatives and it lived up to expectations with the party losing 62 seats.

The SNP remain the largest party across Scotland’s four urban Councils with a particularly strong result in Dundee where the party secured an overall majority.

In Edinburgh Labour remain in second place with a strong result for the Lib Dems who doubled their seats to twelve, and the Greens who won ten seats. Similar to many parts of the country the Conservatives had a difficult election in the capital losing nine seats.

The SNP have gained seats across many rural councils including Midlothian where they have overtaken Labour and Perth and Kinross where they now hold more seats than the Conservatives. The SNP also consolidated their lead in Fife where they gained five seats to bring the number of SNP Councillors up to 34. For the first time the party also won more seats than Independents in the Highlands, winning every seat they contested.

However, while the SNP remain the largest party across many rural areas, the picture is a little more mixed with the Conservatives holding out as the largest party in the Borders, Aberdeenshire, Moray and Dumfries & Galloway, with the SNP in second.

Labour has had an impressive result in West Dunbartonshire where they won overall control. Labour has had some gains in different council areas but remained the same in others, the detail requires more reflection.

The Greens have made record gains in rural areas winning their first Green Councillor in the Borders and four seats in the Highlands where the Lib Dems also made gains.

Despite losses in Highland, the three Island councils remain strongly independent. It was a particularly important election for the Western Isles who have elected the first two women councillors in over a decade.

“It’s a challenging set of election results for the Scottish Conservatives with the loss of 62 seats. Labour, the SNP, the Liberal Democrats all benefited from this and will all have some cause for satisfaction. The SNP gaining seats as the party of government, Labour moving into second place and the Lib Dems and Greens building their councillor base.

This national picture is relatively straightforward and was widely predicted. Beneath it the local picture is considerably more complex and changeable.

The nature of the Scottish electoral system means that relatively small changes in seat numbers completely alter the possibilities for coalition. Adding to the mix a changing of the guard, with numerous councillors including leaders and depute leaders stepping down, we feel these elections represent a real reset moment in Scottish local government.

We can expect intense negotiations over the coming days and small differences will add up to big changes at a local level.”

In this briefing, we explore some concrete actions that public and community sectors can pursue together for local and more equitable, generative sustainable development. The context is the need for a suitable post-pandemic recovery and the urgency that social-ecological crisis now demands.

Worldwide, policies are being designed to make food systems more sustainable, yet food producers and local governments are rarely meaningfully involved in these conversations. In this piece Diana Garduño Jiménez discusses the Fork to Farm which aims to build relationships of trust between farmers and local-decision makers.