Photo by Glen Carrie on Unsplash

Here’s your round-up from the LGIU team with what you need to know about the local election results across England and Wales. This is all part of our one-stop shop for essential elections support, resources and commentary.

If you’ve just been elected, LGIU’s resources for new councillors has everything you need to hit the ground running.

The overall picture in England

In the end, these were challenging elections for the Conservatives, losing over three hundred seats and nearly a dozen councils including London totems Wandsworth and Westminster. Given the context though they may feel it could have been worse.

And while it was a bad day for the Conservatives that doesn’t quite translate into a very good day for anyone else. Labour will be very satisfied with progress in some parts of the country while privately feeling they could have done better in other places. The Liberal Democrats have traditionally made very targeted local approaches, but appear to be quite pleased – claiming the largest increase of seats for any party. Greens and independent candidates, at first glance, seem to be doing well – but it takes a finer level of analysis to determine just how well. 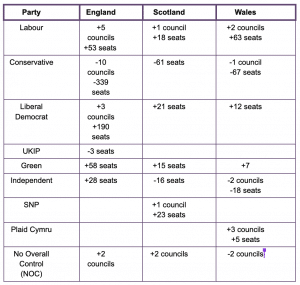 Table reflects all but 4 councils in England and 4 in Wales are still outstanding. We will update these over the course of the weekend.

The big stories overnight were the loss of Conservative ‘flagship’ councils Westminster, Wandsworth and Barnet to largely Labour gains. The song carried on with only a slightly more complicated tune today. Liberal Democrats have made big gains in Merton, for example, becoming the official opposition party on the council and providing further encouragement for LibDems to set their sights on a parliamentary seat in Wimbledon based on growing local support.

One result which will cheer London based Tories is Harrow. With a net gain of seven seats, the Conservatives take control for the first time in 12 years.

Overnight the Conservatives will be pleased to have retained Amber Valley which has historically changed control often and Labour didn’t do quite enough to take Derby which remains NOC.

Conservatives have lost control of Huntingdonshire to No Overall Control. South Cambridgeshire might have been a target given it’s one of the few district councils to elect all-out, but it has remained LibDem.

Hartlepool might have been seen as an opportunity for Labour to regain control locally, but it remains in no overall control.

Labour have made gains of control in Rossendale.

Two new unitary councils formed in the county of Cumbria elected shadow administrations which will be vested in April next year. Cumberland will be Labour controlled and Westmorland & Furness will have a  Liberal Democrat administration.

After one year, the Tory majority in Maidstone is no longer. Similarly, the Lib Dems made no gains either leaving the council in no overall control.

Just north of London councils that have often flipped control have managed to…stay the same. Welwyn and Hatfield has traditionally been a very tough council to hang onto, but the Tories have bucked the trend of the night and done just that.

Labour made gains in Crawley and Worthing and now have control of those councils. Hastings, however, is no longer Labour and has slipped into no overall control.

Councils along the South coast have traditionally been quite changeable. The tightrope in Southampton City Council moved again this year as Labour flipped 4 seats and took back control. While some sources claim that Liberal Democrats have taken control of Portsmouth, by our count it’s still No Overall Control but LibDems are now the biggest party.

There wasn’t much change on the western fringes of the South East, but the Tories lost control of both Wokingham and West Oxfordshire to NOC.

One of the overlooked results of this election was the governance referendum in Bristol. LGIU Chief Executive Jonathan Carr-West explains why Bristolians’ decision to get rid of mayoral position could have a longer-lasting impact on local-central relationships and the devolution agenda.

The Liberal Democrats will form the first administration of the new Somerset unitary council.

Overnight the Conservatives lost control of Worcester but held Dudley, albeit with the loss of a couple of seats. Nuneaton & Bedworth will be another council that Conservatives will be very pleased they’ve hung onto.

Labour have made gains of control in Kirklees.

In perhaps the biggest upset of the wee early hours, the LibDems have taken control from Labour. Local Labour leadership blamed the collapse of the Conservative vote, allowing the Liberal Democrats to consolidate gains.

The overall picture in Wales (with 21 out of 22 declaring)

Both Labour and Plaid Cymru had a good night in Wales. Plaid has, thus far, gained 3 councils in Anglesey, Ceredigion and Carmarthenshire and held their ground elsewhere. Labour have gained Bridgend from a previous no overall control and won control from independents in Blaenau Gwent.

Conservatives only held one council, Monmouthshire, which has been lost to NOC. Merthyr Tydfil was previously controlled by Independents and has now gone NOC. Labour also lost one council, Neath Port Talbot to NOC.

“We shouldn’t forget the real importance of these elections though. From Westminster to Wokingham and Somerset to Hull incoming administrations will have different spending priorities and will take different approaches to key public services like social care, housing, children’s services and planning.

That will make a material difference to the lives of millions of citizens of this country. In the final analysis, local elections are just that. Local. They give us a direct say in the governance of the places we live and work in.

More than 6,000 councillors were elected today: they will have to take tough decisions about vital local services and they deserve all our respect for taking on that challenge.”

In May 2019, the Institute for Fiscal Studies (IFS) launched the IFS Deaton Review on Inequality. This briefing deals with two papers published on 23 May 2022 as part of the Review – Communities, places and inequality and Attitudes to inequality: preferences and beliefs.

An examination of the UK electoral systems

This briefing looks at the various electoral systems in use across the UK and examines the pros and cons of each.

In this session, we heard from a panel of local government experts from England and Australia who discussed their experiences of building and maintaining trust through culture, and the kinds of circumstances which may lead to a loss of trust in local government.