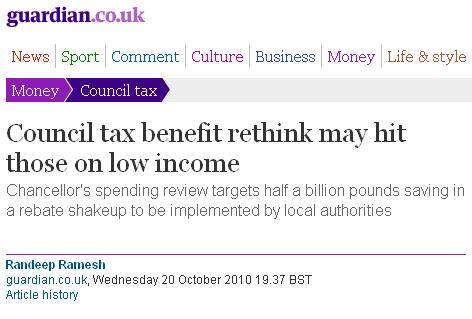 Commenting on the half billion saving from the council tax benefits bill LGiU Chief Executive Andy Sawford said that it was likely councils would probably choose to “stop paying the benefit to certain groups. They could stop paying for long-term unemployed while paying for low-income married couples. It would be an interesting introduction of local diversity.” Councils could cut 10% from bills but that would mean chasing poor people for “a few pounds a week”.

Andy also appeared in Community Care, Regeneration and Renewal, the MJ and Public Finance. He also had a guest turn in the Morning Star.

Local Energy Chief Executive and LGiU Director Andy Johnston commented on the decision to transforom the Carbon Reduction Commitment (CRC) Energy Efficiency Scheme into a new carbon tax on larger companies and public sector organisations in the Ends Report. He described it as a “bit of a bombshell”.

Patrick Butler’s Cuts Blog on The Guardian linked to our analysis.