It might seem counter-intuitive, but this winter I have cycled more than I have ever done in my home city of Glasgow. The requirement to restrict travel and recreation to our local authorities, and with few other outlets for exercise (or entertainment), has meant thousands of kilometres pedalling in the city just about every day. In those often quite wandering cycles, I have found my body doing something. I am almost subconsciously drawn through the city centre, towards the west end of the city, and to what is quite clearly the ‘success story’ of the Spaces for People programme in Glasgow – the Kelvin Way.

A beautiful tree-lined street crossing the River Kelvin, bordering Kelvingrove Park and the Kelvingrove Art Gallery and Museum, it is a space I would find myself in countless times – from early in the morning to late at night, in summer, autumn, and winter. As the year has progressed, and we have moved in and out of various levels of restrictions, it is clear the street has become a hub for people to safely cycle, walk and wheel during these past months (see collage 1). Principally designed a space for movement, it has, in many ways, become something much more. It is a place for people to be in, enjoy, wander, take in the surroundings, appreciate the quiet, listen to the birds, get away from things for a while.

During the Easter weekend of 2021, some activists organised a celebration of a year of Kelvin Way’s pedestrianisation, with members of the public encouraged to bring some art to the street expressing their feelings about its new form. On some beautifully sunny days the positive feelings for the Kelvin Way were apparent in the artwork and conversations I observed, while I added my own small contribution by displaying some photographs I had taken of the street over the preceding year (see collage 2). 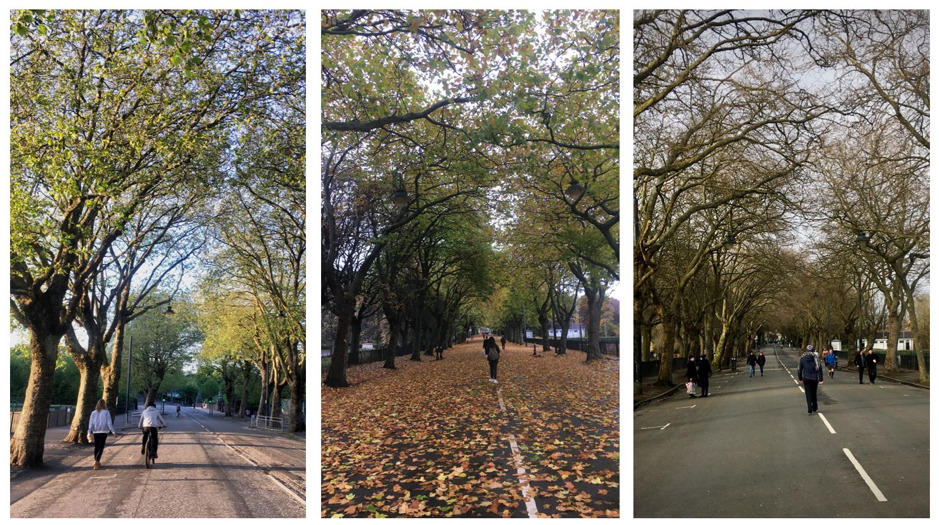 Collage 1: A triptych of images, each taken 5 months apart – May last year, October, and now this March – give a flavour of the Kelvin Way as it has established itself as a ‘space for people’.

A view from Dundee

Dundee’s Union Street is an excellent example of another location that has been transformed utilising funding from the ‘Spaces for People’ programme, and which I visited in summer 2020 when travel (and outdoor dining) was permitted. Directly leading from the city’s train station, and the new V&A museum on the waterfront, the street is lined by several cafes, pubs, and restaurants. Making use of various ‘soft segregation’ measures (cones, signs and some large ‘planters’) it was closed to private vehicles, reapportioning the space to pedestrians and cyclists for access (see collage 2). As well as restricting vehicular traffic, the new design permitted cafes and pubs to set up small barriered seating spaces for outdoor drinking and dining, while nonetheless remaining accessible for deliveries. Since my visit last summer a professional street artist was employed to further enhance the sense of place, while Dundee city council reported on the benefits to people, as well as significantly positive feedback from traders. Winter Covid-19 restrictions will have limited the use of the street for these purposes, but Union Street has positioned itself as ready to open up as a genuine ‘space for people’ when things allow. 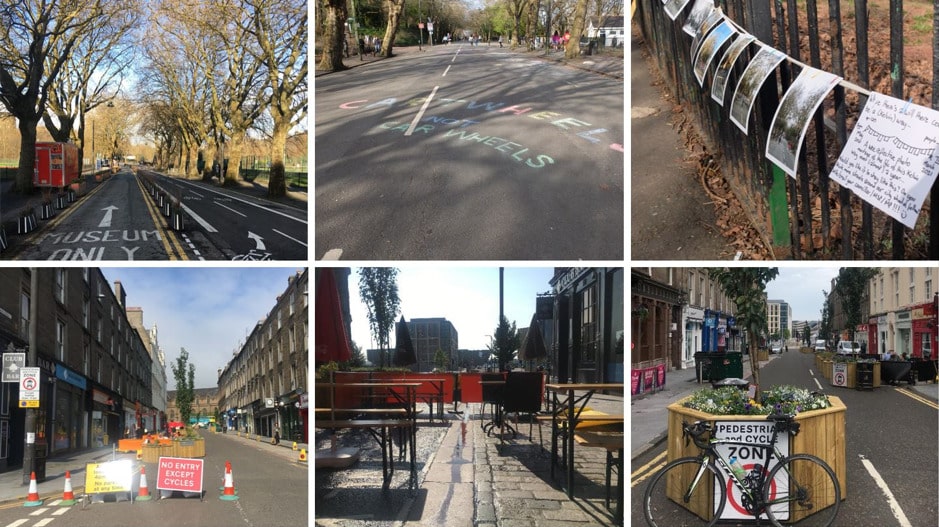 Collage 2: Top 3 images- Glasgow’s Kelvin Way, including during Easter 2021 weekend celebration of its pedestrianisation. Bottom 3 images – Dundee’s Union Street in summer 2020 as it was transforming into a ‘Space for People’.

‘Proving’ the benefit of such projects

Here raises an issue, when changes to places we live are required to ‘prove their value’ – and the tendency to use valuation approaches that often rely on financial or economic measures. How much (money) will it cost/save to do these things? What is the ‘economic case’ for them? This, however, is problematic when success or failure is judged by economic priorities alone, which can neglect much wider social and ecological factors. Intrinsic, qualitative considerations such as wellbeing or ‘sense of place’ cannot be adequately expressed in quantitative and/or financial terms.

For me, some of the best expressions of the value of the Kelvin Way came in the days after Christmas, when even in cold (and sometimes snowy conditions) families were out on the street, with children riding new trikes, bikes, scooters, skates, and skateboards. As I was pedalling along on one of these days a wee girl scooted towards me, tearing down the centre of the street. Passing me she joyfully, at the top of her voice, let out a long, prolonged cry to the world: “wheeeeeee!”. And I think that measuring streets by number of ‘wheeeees’ might be one of the best judgements of value that I can think of.

The developments to Glasgow’s Kelvin Way or Dundee’s Union Street do not feel ‘temporary’, or ‘add on’, or something that should be ‘returned to normal’ as we emerge from the Covid-19 pandemic. They are spaces for people and must remain that way. As Daisy Narayanan from Sustrans articulates, such changes are about making our towns and cities safer, more inclusive, liveable and sustainable. As we move towards summer and our places and spaces can reopen to people again, it seems like we should have streets across our towns and cities that are like the Kelvin Way and Union Street.

On September 6, First Minister Nicola Sturgeon announced the Scottish Government’s new Programme for Government (PfG) 2022-2023. This briefing will summarise key points of this announcement and highlight the parts most relevant to local government and public services.