Image by Thomas H. from Pixabay

At a meeting with LGiU Scotland’s newest member, Highland Council, we had a good discussion about local economic development and examples of success. One example stood out; Sabhal Mòr Ostaig on Skye. Sabhal Mòr Ostaig is the Scottish National Centre for Gaelic Language and Culture. The current main campus is beautifully situated on a headland near Armadale and can be clearly seen from the ferry to Mallaig.

In August this year I visited the campus to learn more about this unique model. My host was the Director of Development, Fundraising and the Arts, one Donnie Munro of Runrig fame. Donnie is full of passion and energy for Sabhal Mòr Ostaig and that energy matched by good timing, enthusiastic fellow travellers, supportive national funding, a bit of luck and imaginative local government have helped to make it a success.

The story began in 1973 when Sir Iain Nobail bought some land and recognised that it could be used to advance an idea – the idea that language and culture could be drivers of economic development. The initial interpretation of that idea was to equip young Gaelic speakers with business skills. By 1993, the college had reached critical mass of teaching facilities and accommodation and the next year integration with the University of the Highlands and Islands cemented its academic credentials. Sabhal Mòr Ostaig now offers both undergraduate and postgraduate degrees, and has five professors and 14 doctorate level staff.

Over the years the central idea that originally drove Sabhal Mòr Ostaig continued to develop in three main directions. Firstly, the expansion from language to all elements of Gaelic culture; secondly, entrepreneurship; and thirdly, the physical development of the site.

Examples of the exploration of Gaelic culture include courses in Gaelic arts and culture, architecture, music and media. There have also been initiatives to reconnect Gaelic culture across the Scottish Isles and forge strong ties to Ireland and other Gaelic-speaking regions. The use of culture to reignite relationships that have been weakened over time is particularly interesting. The whole of the west of Scotland is suffering from poor economic growth and depopulation amplified by the pull of Glasgow and the central belt. Any counterweight to these forces must be beneficial. There is a rich seam to mine – Sabhal Mòr Ostaig currently has projects on Gaelic place names, a Gaelic dictionary, sound recordings and the development of a unique library.

Whilst much of the new activity at Sabhal Mòr Ostaig is academic, there is also a healthy entrepreneurial culture. If an idea is interesting, could it be a business? Over the years new enterprises have been developed, e.g. in multimedia or television production. This theme will continue as the physical development of the site continues with space put aside for startups and a plan for a teaching hotel. A holding company has been established and the new businesses are established under its auspices.

The most obvious manifestation of the continued growth of Sabhal Mòr Ostaig is its physical size. At first organic, there is now a masterplan for a whole new settlement – Kilbeg. The support and facilitation of new buildings is the most obvious way Highland Council has contributed to the success of Sabhal Mòr Ostaig. Highland Council has directly supported the construction of new buildings, as well as helping with planning applications. When a project was short of funds to buy land, the council was able to use its vacant and derelict land fund to free up the resources needed and provide flexible repayments.

The socio-economic impact so far has been positive. The population of Sleat has doubled, and the inward investment amounts to £3.5m. Sabhal Mòr Ostaig employs 138 FTEs with an average salary of £26K per annum for year round employment. The primary school roll in the area has trebled also.

The issue of land is a constant theme where local authorities look to promote economic development (for example, Dundee’s imaginative use of its waterfront estate). Arguably, this is where luck has smiled on Sabhal Mòr Ostaig. Sir Iain Nobail bought the land to start the project, the local authority has helped with land purchases and the local landowner (the Clan Macdonald Trust) has been a co-operative partner willing to do deals to create win/win solutions. In addition, Sabhal Mòr Ostaig has grown while significant EU and national funding has been available to it, meaning that it has no debt financing and no debt. One concern for the future will be the replacement of ERDF money and the ability of local authorities to be local facilitators if funding is constrained.

However, the land is secured and the plans drawn up. Kilbeg is not just intended as a token Gaelic settlement, it aims to address some of the problems faced by Sleat, Skye and Western Scotland. A primary driver is affordable housing. So, while there is no intention to create a Gael-only enclave, there is a need to give potential purchasers a clear message about the site’s mission – in an area where house prices have been driven up by incomers and second home owners.

The Kilbeg development will include 31 affordable housing units which will be sold on rent-to-buy terms. The development will also be a mixed age community. At a basic level, this will allow new Gaelic speakers to meet those who have spoken it all their lives – but of course, there are far more benefits available as the generations speak to each other.

There will be in total 75 new homes, college buildings, a sports complex and a conference centre. 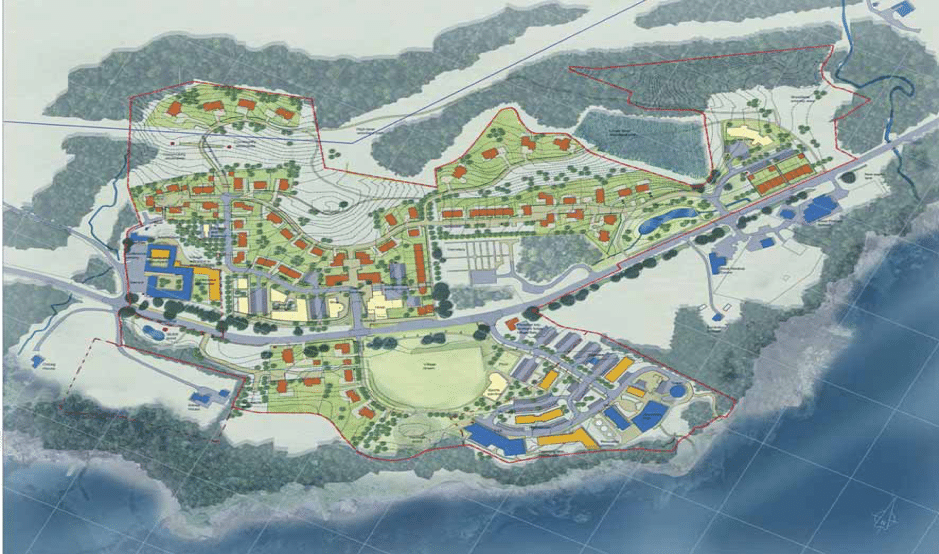 There will be a hotel on site to accommodate visitors and short course attendees. The intention is that this will be a teaching hotel so that standards of service in the Gaelic speaking hospitality industry are equivalent to others. In addition, my visit to Stornoway identified lack of accommodation for hotel staff as one of the reasons that Eilean Siar has so few hotels compared to what it offers in self-catering.

It’s the classic holistic approach. So easy to articulate and so difficult to deliver. The combination of promoting a language, developing a culture, creating high quality jobs, providing appropriate housing, building community facilities, starting new businesses and building a world class academic institution is quite a trick to pull off. As Kilbeg and Sabhal Mòr Ostaig develop, LGiU Scotland will continue to learn the lessons and pass on the good practice. Anyone following will have to deliver without EU regional support, so where will the money come from?

In all this, Highland Council has been seen as a positive facilitative partner. This illustrates that the local authority does not necessarily need to lead regeneration in order to fulfil its civic role but it does need to be ready to respond when needed. At the very least, this means that local authorities should recruit staff or form partnerships that ensure they can identify initiatives more likely to succeed and then have the tools in the box to help (money, policy, community facilitation, accountability and if possible land).