We are proud to once again release LGIU’s Ones to Watch guide to the local elections with what’s at stake and up for grabs as voters go to the polls on 5 May 2022 to elect over 6,000 local representatives across England, Scotland and Wales.

LGIU’s Ones to Watch is less prognostication and more a highlight of the key local contests to have on your radar in the lead up to polling day. While it may be tempting to some to use local elections as a temperature check on national politics, each council area and indeed each seat in each ward is its own race and influenced at least as much by local issues and personalities as national political parties. 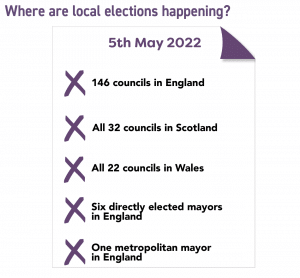 These local elections are the most important elections of all: the ones that make a real difference to our communities, to the places we live and work, to the public services that we all rely on. That is why, for well over a decade, we’ve been working with local government to bring you the best support, resources and commentary before, during and after these all important elections.