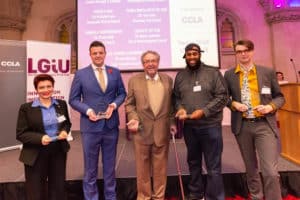 Local councillors from across the country were announced winners at the annual LGiU and CCLA Councillor Achievement Awards. The annual Awards Ceremony, kindly supported by CCLA, was held on Tuesday evening (November 6th) against the backdrop of the Guildhall’s Livery Hall in London. With nearly 200 nominations, competition was extremely tight. The winners were selected by a group of judges made up of council leaders and chief executives.

Dr Jonathan Carr-West, Chief Executive of LGiU, commented: “It’s been fantastic to listen to the stories of people working selflessly for the community, bringing real benefits to residents. The winners are dedicated to the cause and hugely talented. The outstanding quality of the nominations we received this year stands as a testament to the exceptional job many councillors are doing for their community.”

The judges were impressed by Cllr Hashi’s boundless energy and the wide range of work that he is involved in, which includes helping homeless people within Lambeth, working with gangs and working within committee to advise the police about local issues. Judges also highlighted the difficulties of being a councillor within a challenging community environment. His level of involvement is exemplified by the injury he sustained when he was shot trying to break up a fight, and since then he has introduced measures such as the ‘New Beginnings’ youth organisation to help individuals to leave gang life safely, which judges noted is a key social issue in London.

Judges commended Cllr Hebb’s transformative effect on Thurrock council’s finances. Since taking on the Finance Portfolio he has succeeded in alleviating a substantial deficit through adopting an ‘outside the box’ commercial approach that avoided salami slicing services and minimised the impact on residents. Judges also noted that Cllr Hebb had succeeded in taking on a challenging portfolio at a young age.

Councillor Michelle Lowe impressed judges with her proven track record of helping her community stay healthy with the implementation of her ‘wellbeing starts at home’ and ‘early intervention’ policies. She has also taken the initiative to share her findings with peers in other councils and has built coalitions across Kent, demonstrating the impressive impact that district councils can have on health and care policy.

Judges felt that not only had Councillor Roger Lawrence shown consistently strong leadership in implementing a long-term vision for Wolverhampton, but had also had an important impact on a regional and national level through his work setting up the West Midlands Combined Authority. In addition, he has had an important impact on local employment with the successful Wolves@Work scheme and through the impressive regeneration projects he has overseen.

Councillor Iain Malcolm represents an area which has historically suffered from serious deprivation, but has seen a remarkable change in fortune in recent times, in large part thanks to Cllr Malcolm’s ambitious whole-place vision. Thanks to the £100 million investment he has plugged into the town centre and the work to attract and set up the new Advanced Manufacturing park has succeeded in increasing job opportunities and making the area a vibrant place to live and work.

Councillor Ian Bates impressed the judges with his recognition of the importance of getting the foundations right in terms of digital inclusivity, overseeing large-scale projects to improve public WiFi access and 5G coverage, especially in rural parts of Cambridgeshire. Thanks to Cllr Bates’ advocacy Cambridgeshire is now 96% covered by superfast broadband, a crucial aspect of modern life and important for both residents and businesses. Judges also commended his business-like approach when persuading the council to invest £10m in a solar farm which has subsequently been able to reinvest revenue back into local services.

Judges commended the impact that Councillor Tom Coole has had from the position of opposition within the council, from making improvements to council scrutiny and improving the local political transparency, to helping to tackle knife crime and encouraging the council to adopt new environmental strategies. Judges felt that it is important to recognise the impact that opposition councillors can have when operating from a less powerful position.

Councillor Alex Harman (Worthing, nominated for Young Councillor of the Year) impressed judges with his engagement of young people in their history through the weekend-long remembrance event for soldiers who died in WWI, many of whom would have been the same age as the young people that Cllr Harman was reaching out to. They also noted that he was using his youth to attract other young people into politics through social media and admired his fancy dress tactics in fundraising for local charities.

Judges noted the efforts of Councillors Peter Patrick (Babergh) and Glen Horn (Mid-Suffolk, both nominated for Finance and Transformation) to merge services across the two councils was a particularly impressive achievement considering they managed to save £13m across two relatively small district councils, unlocking cash to reinvest into local services. Moreover, judges were struck by the hands-on approach that Cllrs Patrick and Horn had taken to implement the savings, taking pains to involve staff in the process.

Councillor Linda Haysey (East Hertfordshire, nominated for Leader of the Year) was commended by judges for sticking her head above the parapet in order to ensure the acceptance of the development of two garden towns on greenbelt land. Judges commented that it is often tempting for a leader to offload the tricky community liaison issues in developing Local Plans to others, but Cllr Haysey has taken a personal lead in speaking to residents and gaining their support.