It was always going to be difficult to remove party politics and populist demands from the pandemic.  Initial calls for, and early evidence, of a mature non-partisan approach, did not last long.  We have returned to normal in party politics though that luxury is not yet available in the serious business of developing and implementing policy.

Public bodies have long prepared for emergencies but the pandemic stands out for its scale and duration.  Terrorist attacks, major fires and flooding are devastating but the impact is limited geographically and in duration.  Everyone and everywhere has been affected by Covid-19 over a long period of time.

Anticipating the precise course of the virus has been difficult.  At each stage, evidence has been partial while there have been unrealistic pressures for clarity in policy responses.  In such circumstances, policy-making has been understandably cautious.  Preparing for a range of contexts requires careful contingency planning.  This inevitably means preparing for some eventuality that will not come to pass but most certainly does not mean that such efforts have been wasted.  Those who have demanded clarity are simply wishing the pandemic away.  Policy makers and those delivering services cannot choose the environment they inhabit.

Frustrations have been building and one of the challenges has been to ensure public safety against expectations of quick solutions driven by those who only have to deliver headlines and stories for the media.

Legitimate interests will diverge.  Many businesses want to lift lock-down sooner than those working in public health.  This might reflect a greater appetite for risk.  Businesses have a legitimate claim to be heard and different claims weighed.  Motives have been impugned in our adversarial politics.  Accusations that lobbyists have been active, fronting up business interests may or may not have substance.

Two weaknesses in the current political system have been highlighted.  The lack of transparency and lack of distributive leadership.  There has been a revolving door of former politicians from almost all parties ending up working as lobbyists and a growth of ‘think tanks’, often seen as fronts for lobbying.  We have to be careful not to throw the baby out with the bathwater.  Lobbying and ‘think tanks’ are hallmarks of liberal democracies but we should have a right to know who funds these and more about how these operations work.  Greater transparency would benefit all legitimate interests.

The crisis also calls for distributed leadership in which all spheres of government, all politicians, including those in opposition, and other stakeholders have a role.  The absence of an opposition is dangerous.  Even at the height of the second world war there were important voices in the House of Commons, led by Nye Bevan, challenging Churchill’s approach.  A critical and constructive opposition is essential at all times.

But critical opposition is different from the cheap adversarial populism evident in so much of Scottish politics.  The most generous interpretation is that this is a display of frustration and a desire to get back to normal.

While much emphasis has understandably focused on health workers, we have tended to neglect the extraordinary efforts of key workers in local government and the voluntary sector.  Particular effort has gone into addressing the needs of vulnerable children. Millions of free school meals have been provided which has been more challenging without access to school premises.  A number of politicians have understandably raised concerns about digital poverty and the difficulties with ‘hard to reach’ children and parents.  Local education authorities and school staff have been working hard to reach families and communities to ensure we hear those whose voices that are all too often drowned.

While much attention has been generated by the Education Secretary’s recent announcement on school opening, no authority can assume that we will be back to anything like normal in August.  The unpredictability of the virus and prospect of a second wave mean that contingency plans need to be in place.  This was summed up in a tweet from a geography teacher: 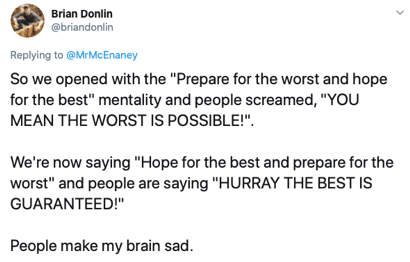 Crises can lead to centralisation and there has been no shortage of demands that Scottish Government take control.  But experience should have taught us that while ‘take back control’ makes an easy slogan, delivery is what counts and is much harder.  Care needs to be taken in the allocation of roles, responsibilities and capabilities to deliver.  The UK and Scottish Government hold the purse strings. Scottish Government can act as a platform and provide broad support but delivery is done locally.  The knowledge, experience and expertise at local level far outweighs that at the centre and should be harnessed and respected.  Scotland has long suffered from heavy-handed central interventions.

There ought to be a major lesson for Scottish central government.  The long process of centralisation sucks up more responsibility than power from local government. Scottish Government becomes responsible for what goes wrong in any local authority.  No Minister in Edinburgh can ever control delivering a service throughout Scotland.  But centralisation has invited this absurdity.  In a speech in February 2015, the First Minister referred to education as a ‘shared endeavour’.  That needs to be recognised in institutional capacities as well as rhetoric.

One positive reaction has been the flexibility Scottish Government has permitted with previously ring-fenced resources.  As we emerge from the crisis, that is a lesson that should not be forgotten.  More flexibility is required, not more centralisation, not more uniformity.  But this cannot involve devolving responsibility without ensuring local authorities have the capacity to deliver and that means more money.  The crisis has once more highlighted the parlous state of local government funding, the dependence on Scottish Government grant, and the disproportionate cuts experienced by local government.

Proposals that often appear at first sight to be simple solutions have proved to be more complex on examination.  There have been calls to requisition buildings to provide for an increase in the school estate.  Superficially attractive, the idea runs up against a number of challenges. Church halls etc present major problems not simply because they are not purpose-built.  Requisitioning is not straightforward but even if access could be guaranteed, there are many other issues involved.  Education is a multi-faceted service and much has been overlooked in the search for a quick fix. Buildings would need to pass stringent health and safety tests.  It is not so long since parents were rightly expressing concerns about the school estate in Edinburgh after the tragedy at Oxgangs Primary.  A range of considerations cannot be overlooked: the need for (deep) cleaning, provision of school meals, playgrounds, enough toilets and handwashing facilities.  The list goes on.  Providing education is more than about the curriculum.

And on the subject of the curriculum, anyone who has ever had to translate a course online will be aware of the challenges involved.  Scottish schools have been building on work already underway in this respect including e-Sgoil launched by Comhairle nan Eilean Siar in 2016.  The council aimed to provide more choice and equity in the provision of subjects regardless of where pupils lived.  Learning from this and sharing experiences have occurred through various local government and education networks.  Work on collaboration before the crisis had been slow and local authorities need to be given more incentives to build on the shared resourcing, service platforms that already exist.

One of the key challenges in many authorities with sparsely populated and rural communities is school transport.  Social distancing creates a massive headache unless the public health situation permits relaxation.  Fife Council, for example, have contracts for 424 buses but that will be inadequate if social distancing is required.  Simply sourcing enough buses, leave aside finding resources to pay for them, cannot be brought about with a ‘can do’ attitude.  Cheap talk does not provide good education infrastructure.

What might emerge from this crisis is greater awareness of what is involved in delivering public services.  It might also come as a surprise that many of the ideas that have been posited have been under consideration and developed across education authorities from the start of the pandemic.  It may well be that one of the big lessons is that local government has been poor in advertising the work it does, the variety of initiatives underway and the ideas that have been considered.  We live in an era of cheap talk and populist politics.  This means that communication skills which many public servants find distasteful, preferring to focus on delivery, are essential in the policy maker’s toolkit.  It may seem like a diversion to many working hard on delivery but it is a necessity.