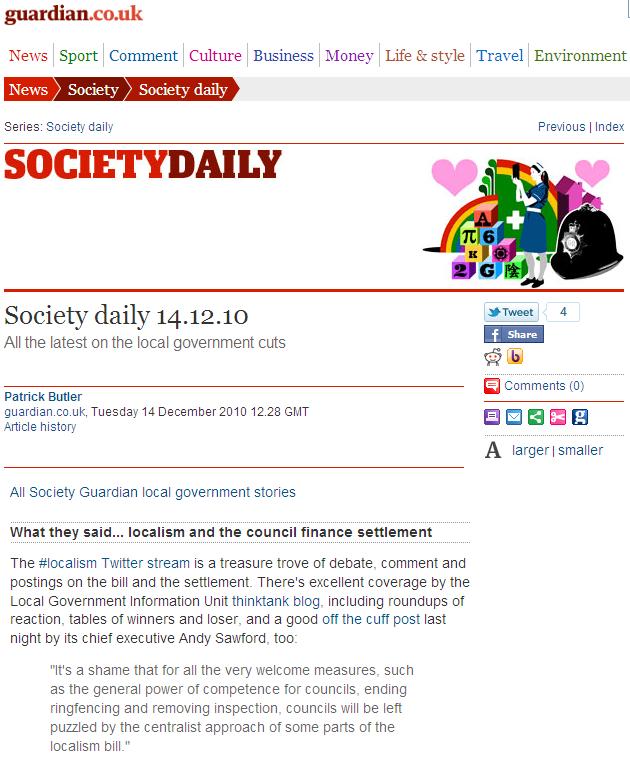 The Guardian’s Patrick Butler has just featured LGIU in his ‘Society daily’ page. He very kindly said that “There’s excellent coverage by the Local Government Information Unit thinktank blog, including roundups of reaction, tables of winners and loser, and a good off the cuff post last night by its chief executive Andy Sawford, too” 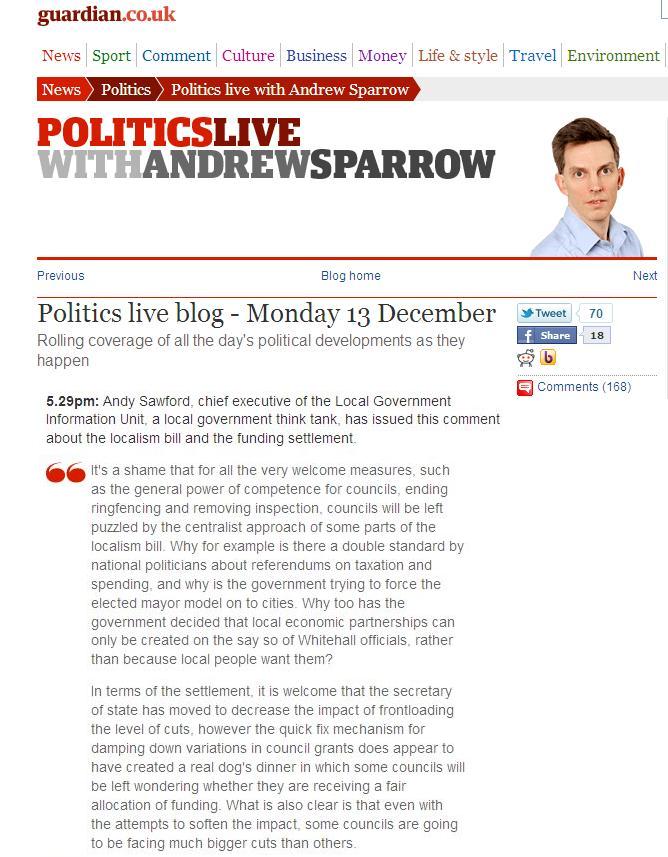 LGIU were featured in a few media stories yesterday. The Guardian’s Andrew Sparrow posted LGIU twice on his Politics Live blog (included a special mention for our *LIVE* blog), Channel 4 News included Andy’s reaction to the bill in an article written by Eric Pickles  and LGC dedicated a page of ‘What they said’  to Andy’s analysis of the Localism Bill. 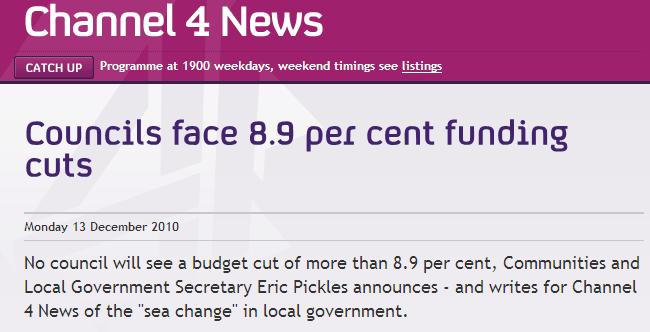 “These announcements will each have a huge impact on local councils and local communities.  Together they represent unprecedented change in our public services and in the governance of Britain.   The finance settlement will be very tough for councils and there is no doubt that some, if not all, will have to make major cuts in spending.   At the same time the Localism Bill envisages a brave new world in which councils are free to lead their communities and citizens are free to challenge the council.  We absolutely support this aim, but it’s important to be realistic and acknowledge the difficulties that must be faced.

Eric Pickles hails it as a revolution, but Britain is not a revolutionary nation.   We will succeed more in the years ahead if local councils and citizens work in partnership – that means councils opening up the town hall, opening up the books, and being open to challenge.  But it also means councils and councillors being supported in their vital role as community leaders and having the freedom to make local choices without central government straightjackets and interference.

The full LGIU press release can be found here and funding settlement winners and losers (in £s and %) here. Andy has also been on to three different BBC Radio stations (BBC West Yorkshire, West Midlands and Sussex) where focus, according to Andy’s twitter stream, has been mostly on the cuts.

The issue of  elected mayors was of interest for BBC Radio Leeds as Leeds, Bradford (where Mr Pickles is from) and Wakefield are all scheduled to hold referenda on May 5th. Andy was asked to respond on a comment from Ian Greenwood, Leader of Bradford Council, that having an ‘elected mayor would cause political interference’. Andy said that ‘there are indeed already powers for people to push for a referenda on elected mayors if they want to, so it may come as quite a surprise to some that given that this is a bill about giving more powers to councils and communities that the government are pushing a particular type of local leadership’.

Asked whether the Localism Bill would strengthen or weaken local democracy, Andy said, ‘I think the most important thing is that councils and citizens work together. So things like opening up the books so people can see where the money is spent, opening up town hall a bit more about decision making are absolutely right, however, councils still play an important role as they are elected and they have to make choices’.

Andy was then asked if Monday was a pivotal day for local government? He said ‘pivotal is perhaps an under statement – this is the biggest day we’v seen in governance of local public services in this country in my lifetime. However, we won’t see this change today, we’ll see if over the next few years but what today sets up is a very big period of change’. You can listen to the 15mins discussion on BBC iplayer here – ff to 1:02:00

Andy has appeared alongside Surrey CC Leader, Dr Andrew Povey on BBC Radio Surrey (scroll forward to 1:11:50). Andy said that ‘everyone should start talking to councillors and think about how, as a community, they can start working this out’.

The Centre for Cities blog also used our Written Ministerial Statement post, as did a few regional news and hyperlocal sites.