It seems to me like we’ve been promised each year for a while that this election will be the social media election. I think it may have finally arrived. And if we didn’t notice it, it’s because social media is now so commonplace that we hardly notice. Even the Electoral Commission had to advise against selfies in polling places. And in typically British fashion #dogsatpollingstations trended on Twitter alongside #GE2015.

Councils, too, used digital and social media to raise awareness of the electoral process.

Voting is secret, but democracy is open. It’s only with this unique combination of privacy and transparency that we can continue to enjoy free and fair elections as much as we do. Open counts are essential, but even better is full public awareness of the mechanics of democracy. Digital and social media help us do that for so many more people.

So we thought it was worth capturing the good, the bad and the ugly of our local elections and count watch survey of digital and social media usage by councils.

It was a mixed picture. On Thursday, Friday and Saturday, the LGiU covered the local elections results. Over time we saw some great digital and social media coverage and but some was pretty dismal. For the sector as a whole, I’d award the following. And I’ll explain the reasons why. 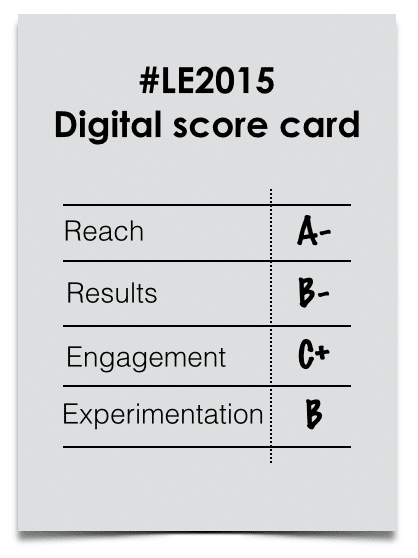 Reach and twitter usage: Not so long ago, it felt like a celebration after a council joined Twitter. This year it was a given that councils would have a Twitter feed. (We think there may only be one that doesn’t.) This year it was a solid bet that if I googled up one of the 279 councils that had local elections last week, I’d find a twitter feed.  There was probably an 80% chance that there was activity on that feed. Some though, hadn’t been updated this calendar year.

And some councils were trying to be engaging and conversational. Some promised to retweet any local #dogsatpollingstations tweets. Some were highlighting their other social media efforts (which we’ll come onto). And some were monitoring their reach.

Did you know…we reached 438,192 people on Twitter during Friday May 8th with our election coverage #GE2015 #LE2015 #theOtherElection @LGiU

For monitoring the counts, we could often see that counts were occurring. But many councils would update with ward results, but fail to declare or link to final results. Bad. Which brings me onto…

Election results: Digital isn’t just about social media. Having clear websites is just as important. So how did councils do on that? Well, it’s a very mixed picture. There were some excellent examples of visualising results.  Coventry made an infographic map that they updated throughout the process which clearly showed what was up for grabs in the general and local elections and then who’d won it. 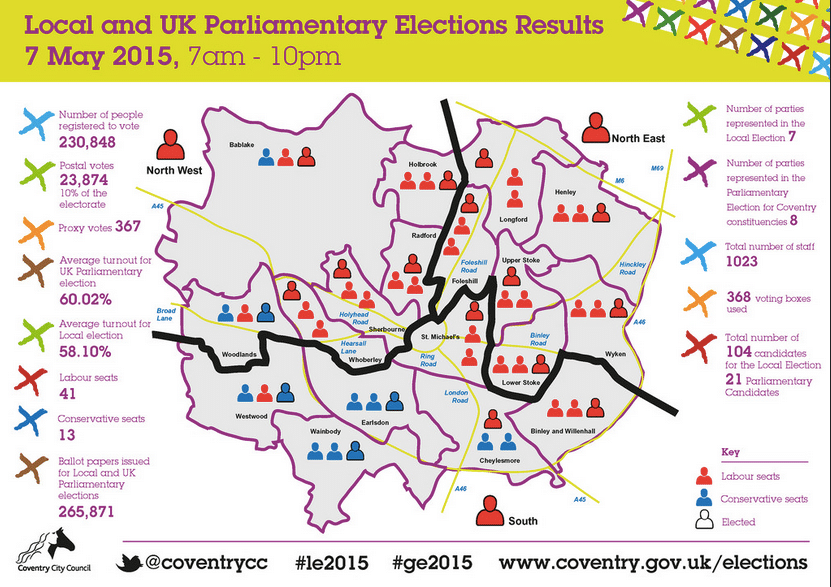 Several other councils all did a really good job, summing up who held political power as well as listing the new councillors as soon as the results were verified.  Places like South Gloucestershire, North Norfolk, Dudley, Herefordshire, for example.  Each presenting their results in a different way, but with clear concise information about who had held power and who now holds it. 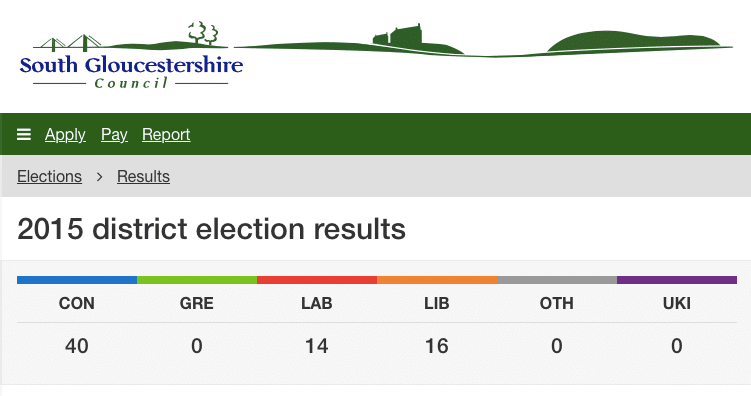 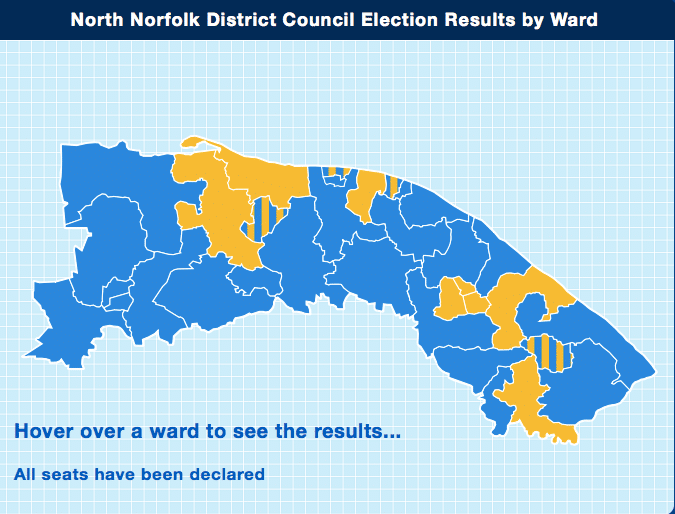 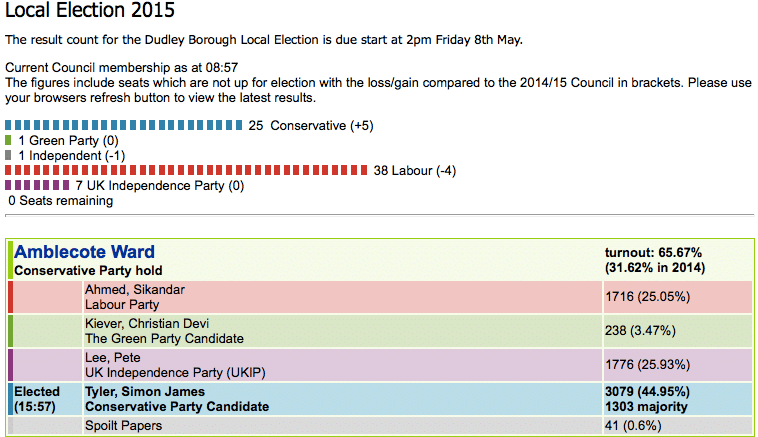 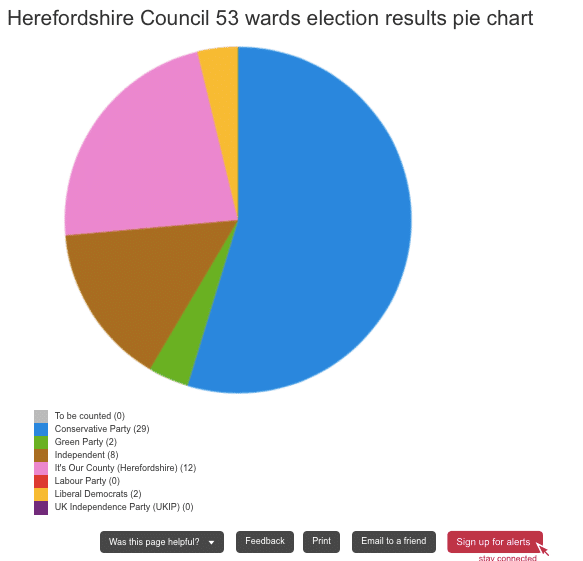 Most councils did ok in presenting results. Too often though I and my LGiU colleagues had to click through multiple pages and obscure navigation to find out who actually controlled the council. Even worse, on occasion, we had to open 30 or more PDF or word documents, see who’d won and then hand count up results by party and do the math. For councils who had elections by thirds with no clear indication of who’d been in power and what seats were up for election, we’d have to hope that the majority was sufficient to make it mathematically impossible for any other party to have control.  For a couple of councils we literally couldn’t figure out who had control or if the council was No Overall Control. That’s not good enough. We deal with council websites and political control day in and day out and if we struggled with seeing who controlled a local area, imagine how a local resident must feel. It’s not fair to accuse people of being apathetic toward local politics and then make it nigh on impossible for them to find out the basics.

Engagement with Democracy: I thought a lot of councils did a really good job of using their websites and Twitter and Facebook accounts to inform people about electoral deadlines; registration, postal ballots, etc.  Some councils really went the extra mile. Kirklees Council held events, posted videos and shared all kinds interesting stuff in their Election Tales. Phil Rumens, Web Development Manager, at West Berkshire wrote up some of the digital efforts they made, from polling station finders to results tabulators and how they’ve shared that with other councils. Some councils were using social media to show the human side of the elections. Jo Miller, the Chief Executive at Doncaster and other returning officers used Twitter to share pictures of stockpiling snacks on election morning and doing the polling day breakfast run for their staff (electoral officers and other council staff work incredibly long, hard days during elections). I saw some councils promising to retweet anyone local who participated in the #dogsatpollingstations trend. These examples were awesome, and I only give low marks because they were too few.  I don’t want to criticise councils who only did an excellent job of getting out the facts, but the conversation is vitally important.

Experimentation: The great thing about digital is that it can often be low cost and pretty low risk to experiment.  OK, it will probably be pretty low impact, too. But that’s how learn. Some councils were getting on board with free live streaming apps like Periscope, many others were live streaming the counts with other tools.  Others were using looping video like Vine.  This didn’t feel like it had a major impact, but that’s ok. It’s experimentation and none of it went wrong, people learned, some people got value from it – so that makes it a success.  The best use of video of all was post-election when Doncaster staff returned a lego man to a little lad who accidentally dropped it in a ballot box.

Even though not that many councils pushed the envelope, I’ve given a pretty good mark because I don’t think we need every council to do it.  For other councils, just being engaging on Twitter may have felt like experimentation. I want to congratulate every council that made strides this year.

The use of digital and social media for democracy has actually come a long, long way. It’s great to see a bit of friendly competition between councils on doing digital right.  This year our LGiU election coverage was easier and faster than ever – though still a lot of work! Engagement with our army of count correspondents was mainly via Twitter. (Massive props to them!).

But local government could still do better. The basics of presentation of our locally elected representatives has to be sorted, and all councils should be using the cheap and easy methods of social media communication to do electoral comms.  Great practice is already out there, so I’m looking forward to the next set of local elections to see even more improvement.

This briefing provides an overview of ‘New Britain: The report of the Commission on the UK’s future’, chaired by Gordon Brown, and published on 5 December 2022. It makes over 40 recommendations for consultation during 2023.

We round up the best thinking on local public services from around the world. This edition includes health inequalities, affordable childcare, corruption, dealing with extreme weather and learning from failure.