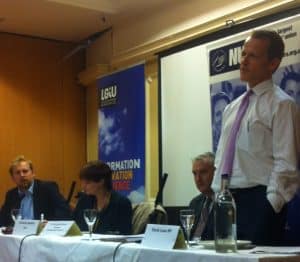 David Laws MP began with a challenge for local government: that “the previous model of schools under local authority control has not always been a success. This is tied too often to low aspirations amongst council officers and politicians.”

Here are some key points and comments from both the panel and members of the audience:

– it’s not practiucal for the Secretary of State to directly manage 24,000 schools

– functions such as accountability, admissions and schools place planning cannot be organised by individual schools but are best organised as local levels.

– councils across thew country are already exercising leadership in many of these functions, though its role is evolving massively

– there are a range of options for organising this middle tier and we need a full and honest debate about them but local government has a key role to play and a unique democratic mandate.

A full write-up of the event is below

Opening the meeting, Christine Blower said that the NUT believed that David Laws had coined the expression “middle tier”, so hoped this idea would be developed in his new Ministerial position.

Following on, Mr Carr-West said that the LGiU’s report on the middle tier took place in the context of more schools becoming academies and free schools, not controlled by local authorities.

He said that while there were advantages and disadvantages to such school models, research had shown that it was much harder for councils to perform their functions under an increasingly fragmented school system.

The result was a risk of sleepwalking into an increasingly centralised system of patchy accountability, he said, explaining that the LGiU’s research had found that most people thought that some sort of middle tier, between the Secretary of State and schools, was needed.

This would encompass a role for admissions and school place planning, among other functions, he continued.

It was simply unfeasible for the Secretary of State to manage 24,000 schools, he said, and accountability was much better delivered at local levels.

He acknowledged that a middle tier would look different in different parts of the country, according to local contexts.

Mr Laws began by challenging Liberal Democrats to pursue a line which would be taken seriously by the electorate.

He said that the previous model of schools under local authority control had not always been a success, and in his travels to local authorities throughout the country, he had heard a constant narrative about educational under-achievement. This was tied to often low aspirations amongst council officers and politicians, he said.

Some local authorities had become apologists for their schools’ results, rather than champions for improvement, he offered.

Centralised invention under the previous Labour Governments had taken place because of the need to deliver better outcomes for students in disadvantaged areas.

Additionally, Mr Laws said that it was a good thing that schools wanted more autonomy. Local authorities had been criticised for not giving enough flexibility to schools, he added..

However, he also said that if the audience imagined an opposite scenario, some schools, such as smaller ones, did not necessarily want greater autonomy. If no middle tier was invented then there would probably be a need to invent one, he offered.

It was obvious that some issues, such as admissions, school places, and coordination of provision for excluded pupils could not sit with individual schools, Mr Laws said.

Furthermore, he thought it was not necessary for an effective scrutiny role to necessarily be played by a middle tier, instead commenting that Ofsted could do a good job in this regard. However, Ofsted could not be a mechanism for improvement in and of itself, he cautioned.

He acknowledged that mechanisms for support and interventions needed to be based on local knowledge and could not simply be accomplished from behind a desk in Whitehall.

He summarised by cautioning the audience about changing models of governance, explaining that we could not simply “go back to a golden illusionary age.”

Cllr Vernon-Jackson explained that councils needed to be honest about their abilities in providing good education services.

Schools were effectively autonomous, he said, explaining that in the context of Portsmouth, schools which had strong leadership did very well, irrespective of their maintained status.

It was “frightening” that there was an automatic assumption that academies would be automatically characterised by strong leadership, he continued, suggesting that this view was a recipe for coasting schools.

He had a fear that there was a lack of challenge from within some governing bodies, and that if there was nothing from the outside to challenge and push ambition, then this could become the case.

Commenting that he did not like academies, Cllr Vernon-Jackson said that pretending that they were not here to stay would effectively be delusional. The question was one of how to produce a system that created the best outcomes.

Additionally, in all schools working together, academy chains should not simply pick and choose who they worked, with, he said, acknowledging that there was a need to be realistic that some local authorities were “crap”.

Therefore, there needed to be work on a system which allowed democratic input and accountability over expenditure and commissioning, Cllr Vernon-Jackson said.

People needed to be realistic about the situation David Laws faced, he continued, as Mr Laws was facing a significant battle against academy chains and people surrounding Education Secretary Michael Gove.

An audience member pressed on arrangements for dealing with situations where capacity needed to be taken out of the system, if there were too many schools and places.

A representative from the National Deaf Children Society asked about the accountability and redress systems open to parents who had to fight to ensure that their children’s special needs were met.

Another contributor pressed on the role of Ofsted and the number of inspections for good and outstanding schools.

Responding, Mr Laws said that schools had to be accountable, but where this accountability lay might not necessarily be at the national level.

On a surplus of school places, he said that there would sometimes be a need for expansion and contraction, and this was why something strategic at the local level was needed.

He put it that academy chains could offer good accountability, as sponsors would have a critical role in holding headteachers to account.

On the frequency of Ofsted inspections, Mr Laws said that he accepted that good and outstanding schools did not need to be inspected every one or two years, but there needed to be a system in place to respond to “warning signals”.

Following on, Cllr Vernon-Jackson said that whilst he did not think that every local council had been brilliant, on the whole they worked to support pupils and tried their best. He expressed concern about academy chains who believed they could handle their improvement processes themselves.

Mr Carr-West added that all of the questions illustrated why a middle tier was needed, and that local authorities, by and large, already filled this role.

Pressed on whether there would be a challenge to the assertion that academy chains would automatically be successful, Mr Laws said that he had only been in the Department for a short period of time.

He said that some local authorities had been complacent in the past, and that whilst it was tempting to take a rose-tinted view, local government needed more of a stimulus than thought.

In response to further questions about inspections, Mr Laws said that Ofsted had the capacity to do a lot of inspection if it was given the budget to do so, recognising that Chief Inspector of Schools Sir Michael Wilshaw had a view of developing a more regionalised school inspection model.

He said that he would take forward previous advances made by Sarah Teather with regard to SEN.