Photo by Deniz Altindas on Unsplash

Attitudes toward democracy, trust in decision-makers and distrust of media have featured heavily in public discourse recently. Last week Carnegie UK published new data on these issues: GDWe: A spotlight on democratic wellbeing. 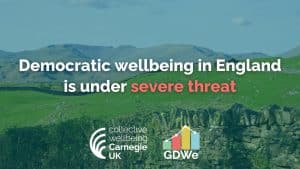 The report, from our Gross Domestic Wellbeing team (GDWe) provides new data gathered by YouGov from a representative poll in England on the extent to which people feel that they have a voice in decision-making.

Three findings are of particular note for local government:

These low levels of trust are concerning. In order for people to feel positive about participating, through both representative and participative mechanisms, it is essential that they first have trust in government.

We found that a large majority were not involved at all or were only slightly involved in local decision making (89%, of which 74% reported being not involved at all), for example by taking part in consultations, focus groups or discussions about local services.

80% reported not being invited to take part in any public engagement mechanisms by government or public services within the last 2 years, with a further 7% reported that they did not know if they had or not.

Our findings depict a turbulent time for democracy in the UK, and an urgent need to increase public trust in institutions, as well as knowledge about the ways that citizens can increase their voice in decision making.

For those in local government who are looking to promote and increase the use of participative democracy, the gap between knowledge in the sector and the awareness and experience of the majority of citizens is something that warrants more attention.

There is no doubt that there are a variety of initiatives underway, but our work shows these are not yet reaching a tipping point in terms of public awareness and involvement. There is a clear need to promote why having a voice matters and the crucial role which we see as an important role for local government can play in rebuilding trust in our institutions.

Children in poverty: Work and Pensions Committee report on families with no recourse to public funds

This briefing deals with the Work and Pensions Committee’s report on children living in families with no recourse to public funds (NRPF). Many non-UK nationals with leave to remain in the UK cannot claim the majority of social security benefits available to UK citizens.

The Improvement Service has launched an interactive collection of Local Government climate change case studies. Judi Kilgallon explains the efforts to showcase how councils across Scotland are working to drive change