Image by Ana Gic from Pixabay

For some, data can tell a story just by looking at a spreadsheet – but for most of us we need a narrative constructed around the points of data to make sense of it. Yet a story told about data or through data without the numbers behind it can lack credibility.

Last week I was invited to Open Data Institute workshop to look at open data stories. We heard about how BureauLocal is using a network of local journalists, civic activists, and data geeks to get underneath the data to build both a national picture and then re-distribute the story locally and with local context. For example, they picked up the story about how new voters could have upset Theresa May’s snap election expectations and turned out to be right. In the next couple of weeks, they are looking at the numbers in councils’ draft budgets to see which services are being cut and where cuts are hitting hardest. At the LGiU, we already tell part of the story of local government finances, backed up with our annual finance survey and it will be interesting to see where these data-driven stories reinforce each other and where they disagree. (If you’re interested in helping out with the draft budget ‘hack day’ this Saturday 3 February there’s more info here.)

Another story that’s being told with data is around local government procurement. With the collapse of Carillion, contract and procurement data helped us understand why the company failed but also the fallout to both local and central government. (See Wired story http://www.wired.co.uk/article/revealed-carillions-billion-pound-government-clients and also an excellent Twitter thread by Ian Makgill.

W also use open data to ensure that stories keep getting told. I recently learned about OpenBenches a project from Terence and Elizabeth Eden which uses both local government and user generated data to capture and explore information about memorial benches. Some of this is a prompt for people’s memorials findable and there are hidden or private stories for each and every memorial. But open benches can also create new stories, there are examples of community groups taking information about benches to help people with mobility problems construct walks with many resting points and a connection with those who loved the community enough that someone left a memorial. 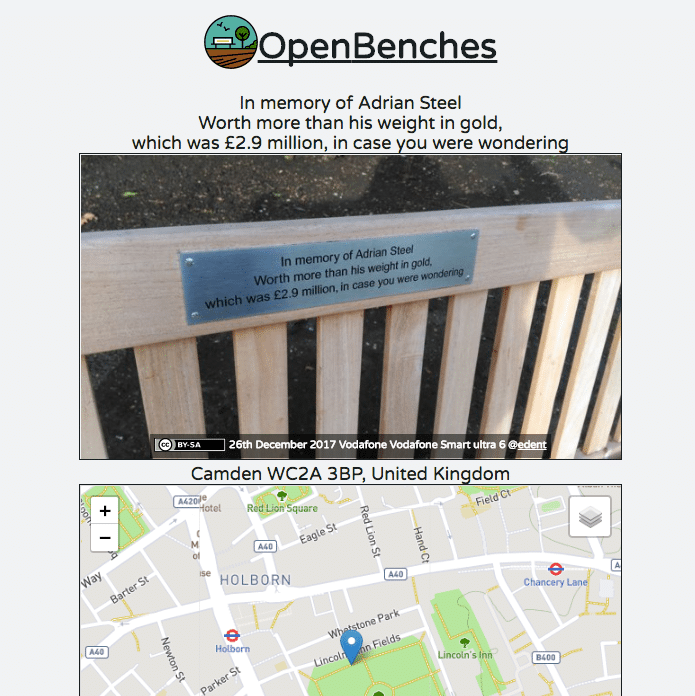 But there are also some stories that aren’t being told, because data gaps are leaving narrative holes.

The two examples I talked about the ODI Data Stories day were local elections and domiciliary care. I’ll be blogging soon on the untold stories in home care, but for now let’s look at elections.

The LGiU has long been covering and promoting local elections. Each year we stay up all night with up-to-minute results and try to get people as excited about local democracy as we are. Over the past several years we’ve seen big improvements in the way that election results at a top level are communicated, but more needs to be done. We have been working with Democracy Club for the past several years, with help from the ODI to support open data for both candidates and results. Democracy Club has done some amazing work on getting candidate data open through crowd-sourcing. But we’ve struggled with getting results data down to ward level, winners and losers and this would help us tell the story about how tight local elections can be, where there have been changes, where turnout is high or low and how discourse on austerity or Brexit or anything else might be driving democratic action. There’s a (relatively) easy way to do this, but it requires councils to publish their basic democratic data openly.

In many ways, this is a no-brainer. I’ve yet to hear a single person say, no that data should be private, the argument has been about how that data should be published. There is now an open data standard which has been published by the LGA and approved as the open data standard for election results in the UK, which should make it much easier to publish this data in a way that helps us build up a national picture, and more importantly, helps us build up a local picture over time.

Elections officers have rightly said that they’re under the cosh on election night and don’t have time to put the data into the suggested format. We get that. It could be done easily on-the-night if elections management systems (basically the database of democratic data which almost also every council uses from one supplier or another) could output the data into the required format. But even without an automatic output, it doesn’t take long to get the data into the required format and it can be done in an hour or less and it doesn’t have to be done on the night. If we had the data by the following Monday or Tuesday, that would be truly amazing and certainly achievable.

With big, important elections in many Mets and Unitaries and in districts and all-out elections across London on 3 May, we have an excellent opportunity to use the standard and make the data open. I suspect we’ll find some really interesting local election stories will be revealed, but we won’t know until we get the data out there.