Fathers Network Scotland began as a seed project in 2008 and was soon spearheading the Scottish Government sponsored ‘Year of the Dad’ in 2016. It is now an established and well respected charity supporting thousands of professionals and families each year to improve children’s lives and outcomes through the positive involvement of dads, father-figures & whole families.

Each year the charity conducts a Dads survey, and in 2022 data was collected from 271 Scottish dads between 27 May – 30 June. At the time the final Covid-19 restrictions had been removed and the country was facing a deepening Cost of Living crisis. The Office of National Statistics recorded that 90% of those living with a dependent child aged 0 to 4 years felt very or somewhat worried about the rising cost of living. The survey aimed to uncover the real stories and human context behind this statistic.

Fathers Network Scotland (FNS) has delivered a series of Dads Surveys to track the changes happening over the last 2 years to assess if the pandemic has fundamentally changed how family’s parent.

Responding to the publication of Dad’s Survey 2022, Gayle Gorman, Chief Executive of Education Scotland and His Majesty’s Chief Inspector of Education, said:

“Education Scotland is delighted to work in partnership with Fathers Network Scotland and we welcome the publication of the Dad’s Survey 2022. Research shows us that supporting fathers to be meaningfully engaged in their child’s learning, in addition to their own learning, is vital to improve outcomes for children and families.”

There are over 400,000 Dads with dependent children in Scotland, and their well-being and level of positive involvement profoundly impact their children, their families and society as a whole.

As a service provider… 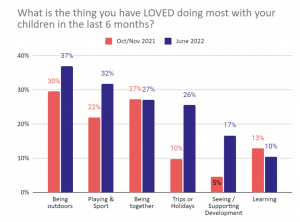 The above graph from Dads Survey 2022 demonstrates the core takeaway from the report: the pandemic has made a lasting impact in that Dads spending more time with their children.

This presents a key opportunity for local governments to provide engaged services to support Fathers in family learning during holidays.

A key route for local governments involves providing programmes to encourages Dads and family learnings during the holidays. Over the summer, FNS released a seven-week programme of activities to capitalise on Dad’s increased family involvement. The Scottish Government has also recognised the need for school holidays to entail parent focused programmes. In Summer 2022, the Scottish Government’s allocated an additional £10 million in funding to local governments for a holiday programme to co-ordinate access to activities, childcare and food for children age 5-14 from low-income families.

However, the route for local government’s does not always require additional service provision. There are currently 504 Scottish public libraries. With many managed by Scottish local governments, the Ambition & Opportunity: A Strategy for Public Libraries in Scotland 2015-2020 showcased projects utilising public libraries such as Family Futures. This early intervention programme increased interaction between parents and children, developed and improved parenting and communication skills.

The report also indicated opportunities for local governments to reach out to parents and capture the voices of parents following the recent shifts in family patterns. The report noted that Dads often don’t believe services value their input or make an effort to involve them. This can be particularly true of working Dads who frequently find it difficult to engage in person during normal ‘office hours’.

However, small changes can make a big difference. The report calls for service providers to consider how to involve Dads more. A starting place involves asking Mums, Dads and children for their opinions. To see case study evidence of how a local government can adapt their service provisions, make sure to check out the LGIU’s previous briefings where Fathers Net Scotland document Fife Council progress in father friendly services.

One key route for local governments to reflect on is their employees’ Work-Life balance. 60% of all those Dads told us they struggled to balance work & family life, with 28% discussing difficulties juggling competing demands of work, childcare & household chores. 46% told us about the negative impact of long hours, extra hours and travel on family life. Increasing financial pressure may be forcing more dads to work more.

A second consideration for local governments as employers concerns Dads paternity leave. Gendered state policies around Paternity and Maternity leave severely restrict parents’ choices, steering them into a traditional division of childcare during the infant’s first months. Fathers increasingly want to share the responsibilities of childcare. However, they are only entitled to a maximum of two weeks of statutory Paternity Leave, whereas mothers are entitled to 39 weeks of paid leave.

In summary, Dad’s Survey 2022 provides insightful takeaways for local governments to reflect upon their role in society as both a service provider and as an employer.

The challenges faced by extraction-based communities

This briefing explores the issues that affect extraction-based communities, both during the lifetime of the mine and post-closure, and the role that local government can play in ensuring the sustainability of the extractive industry. It considers the issue of sustainability and the role of legislation, regulation and policy which should be considered from the outset…