We recently caught up with Cllr Kevin Etheridge, winner of the Community Champion award at the 2021 England and Wales Cllr Awards, to hear about his big win, how the community has responded and what he plans to do next…

With the most nominations for any single councillor this year – several from residents whose lives Cllr Etheridge has directly impacted – this victory felt like an even bigger achievement for Cllr Etheridge as the only Welsh winner of the year too;

“I was proud to win the award as the only person in Wales and I pay tribute to all elected members from every political party and independents who work so hard for their communities – and we must never forget our residents who are an inspiration to us all.”

Cllr Etheridge shares that for him, this award is all about the community, explaining “I regard it as the people’s award. It is for the residents and all their hard work.” Not only a modest man, but Cllr Etheridge has truly earned his place in the heart of the community with over 40 years of service – including civil servant roles such as working as a tribunal officer, peer mentor and alcohol and drug awareness counsellor. As a lifelong resident of the Welsh valleys, he has a clear understanding and passion for serving the best interests of the community he represents.

Last May, Cllr Etheridge achieved the highest independent vote in Wales in the 2021 Senedd Elections, showing that he really does have the residents backing. He described the experience as ‘overwhelming’ after 40 years of waiting, explaining, “it is not been easy as an Independent Councillor in the South Wales Valley with Labour Party in control.”

One of his nominators, Lee Murcutt from Blackwood, wrote for the South Wales Argus that the award was a “fitting tribute’ for all of Cllr Etheridge’s hard work, further remarking that as an independent councillor, “he has no party ties and can make the right decision not based on party politics but on what is best for Blackwood and Caerphilly.”

Cllr Etheridge has spearheaded many successful local campaigns, including better transport links, local hospitals and road safety. Plus lots of campaigning against unsettling building projects in his district. 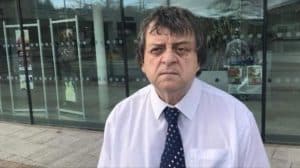 Another cause close to Cllr Etheridge’s heart is raising awareness around bowel cancer and the importance of early diagnosis as he has taken on the role of awareness volunteer at Bowel Cancer UK. This follows his own battle with the disease following a diagnosis back in 2019 where he initially ignored the screening test kit, only to be diagnosed by a professional later on. The kits are provided free for Welsh residents by Bowl Screening Wales but only 55% of people take up the offer, and Cllr Etheridge wants to change that.

Even after his cancer diagnosis, where he was given strict doctors orders to rest and take it easy, Cllr Etheridge continued to work on local issues from his bedside demonstrating his true character and determination to always put the community’s wellbeing first, sometimes even before his own.

Another local Blackwood resident, George Edwards, said that being represented by Cllr Etheridge’s was a ‘privilege’, citing the many local issues he had seen Cllr Etheridge deal with over the past five years with community engagement at the heart of it all. His examples include the creation of Blackwood Showfield skate park – where Cllr Etheridge spent many hours engaging with locals to see what they want and need and to reassure them – along with overseeing the Cwmgwlli housing estate development to make sure no corners were cut. George shares that Cllr Etheridge “always puts the residents first and is always on hand to reassure the local community that he is here to help, any time of the day or night.”

From working cross-party to stop the closure of local leisure facilities to actively raising concerns about building developments impacting on greenfield sites within Islwyn – including chaining himself to the old council office railings overnight! The list of Cllr Etheridge’s achievements in his community is vast and impressive.

Looking towards the future, Cllr Etheridge is set on continuing to create a better Islwyn for all to enjoy, as he explains, “All community matters. Whether or not they voted for me, I believe the interest of the whole of Islwyn counts equally”, he adds that an essential priority is to expand his communication and engagement to ensure that his residents’ voices are heard in Senedd.

Minding the gap: the role of councils in tackling digital exclusion

Councils play a vital role in reducing digital exclusion, however, they are dependent on partners to ensure that more people can get online and use digital technology. This briefing explores what is happening to achieve this around the UK.

Worldwide, policies are being designed to make food systems more sustainable, yet food producers and local governments are rarely meaningfully involved in these conversations. In this piece Diana Garduño Jiménez discusses the Fork to Farm which aims to build relationships of trust between farmers and local-decision makers.

In this blog, Ingrid Koehler reflects on her experience at the Malmö Summit, exploring the key role of local governments globally in sustainability action and the challenges they have to overcome to develop and implement innovative policies.