The #BuyDonegal campaign is an initiative aimed at supporting and showcasing Donegal business to a global audience. The campaign developed by Donegal County Council encouraged consumers to buy a Donegal product or service and post on social media with the hashtag #BuyDonegal.

In 2020 the initial campaign (#BuyDonegalWeekend) ran from 6th – 8th November involving over 200 businesses from designers & makers, food & drink producers and retailers who collectively showcase the best of Donegal business.

The supporting website buydonegal.com had a constant flow of traffic during the launch weekend with visitors from over 40 countries. The campaign reached an audience of over 5 million on Twitter alone.

The campaign ran during high levels of restrictions so most of the businesses involved could only trade online. The campaign provided a valuable tool to assist revenue generation and also encourage participating businesses to get online. After initially planning activity to attract consumers into stores, all activity was redirected towards online initiatives through the campaign site and associated social media channels.

The #BuyDonegal campaign involved extensive social media, web, press and radio campaigns to creative awareness and entice consumers to go out and #BuyDonegal. Partnering with local and national media outlets, interviews with businesses and through the support of influencers across all social media platforms.

In advance of the campaign, there was a six-week build-up with a total of 8 press releases from September 28th until November 4th with a mix of campaign explainers, reminders and business features.

In addition, a series of short business features (10) were communicated across the three platforms of LinkedIn, Facebook and Twitter to showcase primarily smaller business offerings and provide a platform for them to engage. These were taken from a number of range of locations across Donegal to give the campaign a full county approach.

An animated video was also developed to coincide with Black Friday (or Green Friday as it’s communicated in Ireland to support Irish businesses). 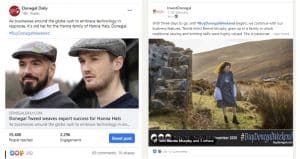 A number of well-known Donegal ambassadors supported with posts, tweets and messages in advance.

In addition, a number of ambassadors developed videos to support the campaign these included singer Daniel O’Donnell, former Irish International Packie Bonner and Donegal Person of the year Noel Cunningham. 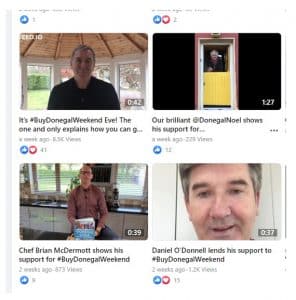 In total 258 businesses signed up for the campaign. After an initial outreach programme to target a range of various business offerings, the site buydonegal.com was launched. Following the roll-out of communications, participating businesses amplified the campaign message by highlighting their own offerings, supporting other businesses and encouraging consumer participation. 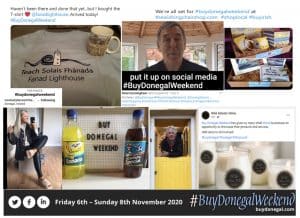 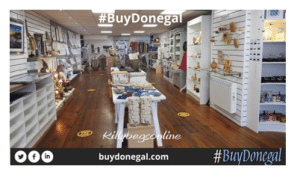 Over the course of the weekend, a series of scheduled posts rolled out across platforms highlighting the range of participating businesses, products, services and special offers available to consumers. The campaign hashtag #BuyDonegalWeekend trended for large parts of the weekend, which encouraged both consumers to support and more businesses to get involved.

Over 20% of participating businesses completed survey feedback on the campaign. 85% of businesses stated that the campaign had a positive impact on sales on a like for like period vs. prior year. Some specific comments on the campaign included, ‘’Local people really bought into supporting small independent local businesses and started Christmas shopping much earlier than they would normally.’’ What I think worked really well was ‘’the strong marketing campaign across social media – It was great to see the engagement!’’ and the ‘’simplicity of message.’’ 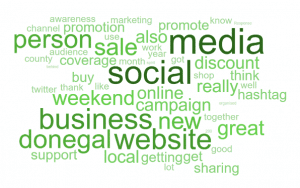 Given the success of the introductory weekend, it is envisaged that #BuyDonegal will become an annual activity and businesses were also asked how the campaign can be improved in future. Based on this feedback for #BuyDonegal 2021 a guide was developed for businesses on how to effectively use social media and harness the impact of the hashtag. The 2021 launch webinar also provided tips and practical examples to use campaign assets in business communications, which were adopted by a number of participating businesses.

Our Global Local bulletin highlights local solutions to global challenges, with a different theme each week offering critical insights, policy suggestions and case studies. We love hearing what our subscribers are up to, and the successes and challenges they’ve experienced in policy or projects. As such, we’re looking for your insights on our upcoming editions.

What does ‘permacrisis’ mean for local government?

This briefing provides an overview of the concept of ‘permacrisis’ and what it might mean for local government and other sub-national partners over the coming period.

This briefing showcases how Clare County Council – Ireland’s recently awarded Local Authority of the Year – delivers for its communities and ensures the county continues to develop as a place to live, work and visit.