Mark Davies explores what happened to the finances of Central Coast Council, where responsibilities lie when it comes to understanding a local government’s finances, and the implications for local governments more broadly.

As the Local Government Minister Shelley Hancock agreed to advance $6.2 million to meet payroll expenses and advised of her intention to dismiss Central Coast Council in light of its financial position, the Mayor of Central Coast Council was taking the extraordinary step of publicly announcing her loss of confidence in the council CEO. According to the Mayor, the full extent of the pending cash flow crisis was revealed to councillors only recently.

“Councillors and the Mayor have been provided with inadequate information about the financial position of Council and discovered the full extent of the problem only last night when it was revealed that Council would struggle to pay its own staff,” she said.

Was this the case, or should the Council have known from as early as July – when they adopted the 2020-21 Operational Plan – that its financial situation at that time would lead them to a path of potential insolvency?

At Council’s 27 July meeting, the operational budget was passed on the Mayor’s casting vote after a reportedly fiery debate that lasted almost two hours.

Some key facts about the Council’s financial position coming out of that meeting were:

On the face of it, these are worrying facts even to the ordinary person on the street, and should have demanded close scrutiny from the Council.

A quick review of the Central Coast Council Operational Plan 2020-21 (p. 96) reveals what the officers believed to be the financial prospects of the municipal government at that time. As stated in the Plan, the Long Term Financial Plan (LTFP) ensures the Council’s financial sustainability and seeks to answer the following key questions: 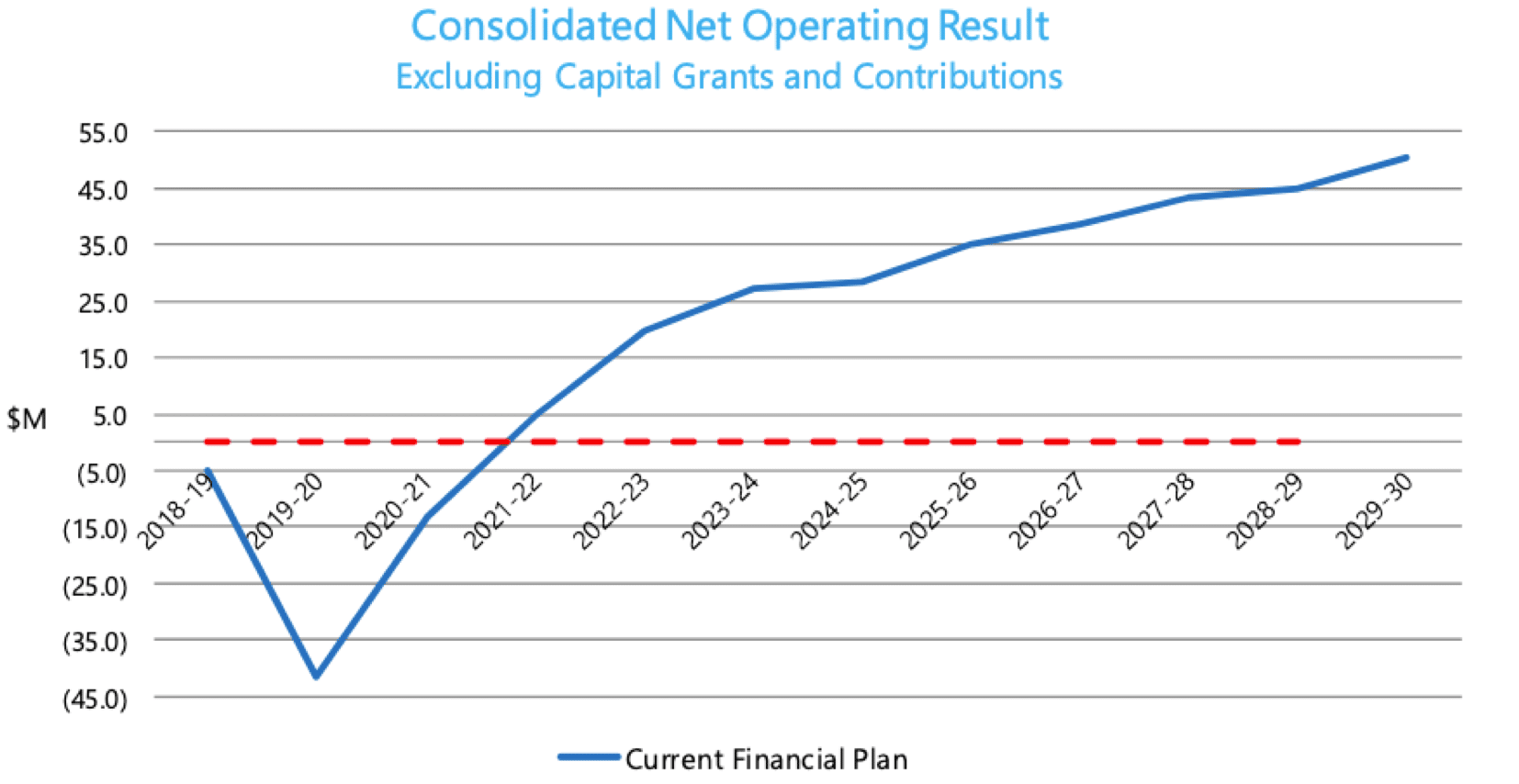 “(A councillor) asked about council deficits, saying a surplus of $723M under the Administrator had been turned into a deficit that would be this council’s legacy at the September 2021 election. He asked the Acting Chief Financial Officer a series of questions about the deficits since administration and highlighted a mistake in one graph. (The Acting CFO) said the deficits amounted to $59M post administration.”

In addition, it is questionable whether the return to ‘black’ – as portrayed in the above graph – in future years was really achievable given the significant headwinds being experienced.

It should have been clear to the Council at its 27 July meeting that there were significant financial challenges facing the Central Coast Council following a spate of natural disasters, including a drought, bushfires, storm events, and the COVID-19 pandemic. Serious questions needed to be asked of council officers thereby, concerning the soundness of their financial assumptions underlying the LTFP.

Returning to the graph above (consolidated net operating result) officers stated in the LTFP, that: “Council is able to manage and correct existing weaknesses and to manage and absorb future threats. In addition, Council is in a unique position to seize and maximise opportunities and leverage off existing strengths”.

A bit of digging through past audited financial statements and operational plans since amalgamation give us some insights into how the ‘manageable’ financial position reported at the 27 July meeting could have turned to a ‘serious’ financial situation with “an immediate and serious liquidity issue” by 6 October 2020.

The following graph compares income (excluding capital income) and expenses against the 2016-17 year, the first year (13.5 months) after amalgamation. The figures for the 2019-20 and 2020-21 years have been taken from the operational plan as reported to Council in July 2020. 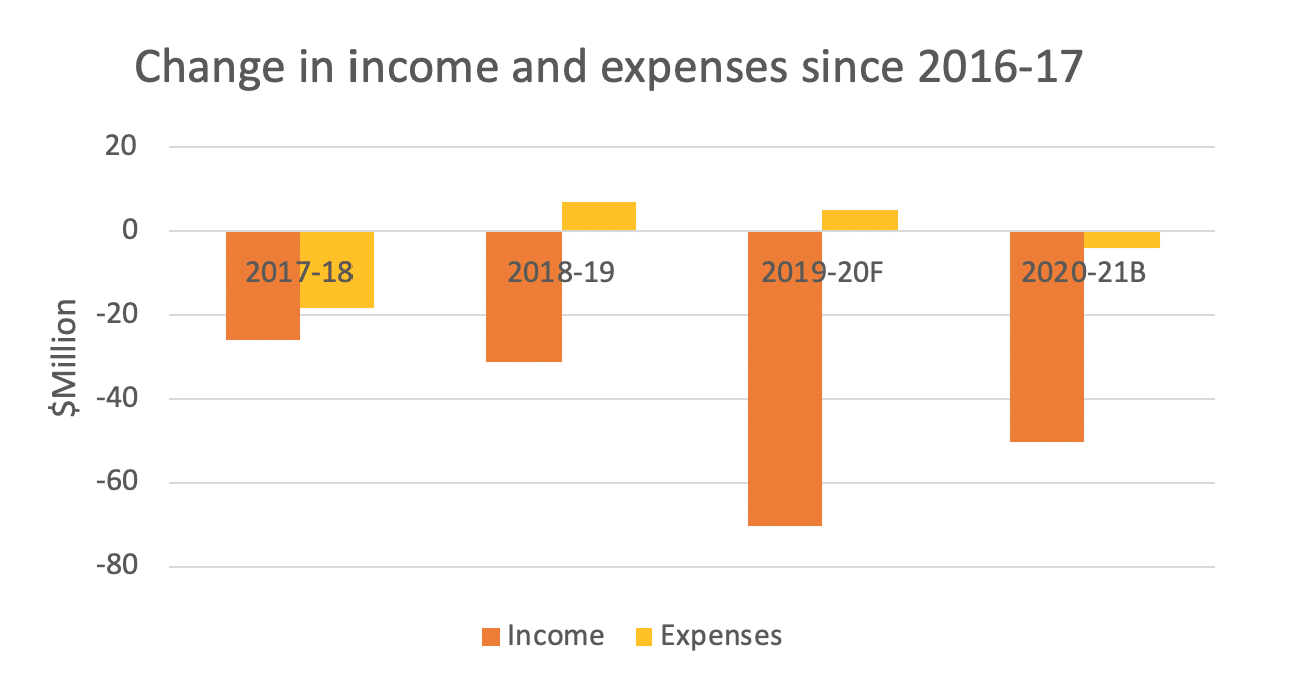 Note: The income for the 2016-17 and 2017-18 years have been reduced for the purposes of comparison to take account of the following one-off and paid in advance grants: “In June 2016 Council received ‘one off’ grant funding of $10 million for New Council Implementation Fund and $10 million for Stronger Communities Fund. During June 2017, Council received an advance payment of the 2017-18 financial year Financial Assistance Grant in the amount of $12.5 million. This amount has been reported in full as revenue in the current reporting period” (General Purpose Financial Statements, Central Coast Council 13 May 2016 to 30 June 2017.)

The graph above shows that while income has reduced by almost $50 million since amalgamation, budgeted expenses have remained relatively unchanged. Unsurprisingly, the operating surplus of $33 million (excluding capital income) reported in 2016-17 has been steadily eroded to a forecast deficit of $41 million in 2019-20 and a budgeted deficit of $13 million in 2020-21 (as depicted in the graph below). 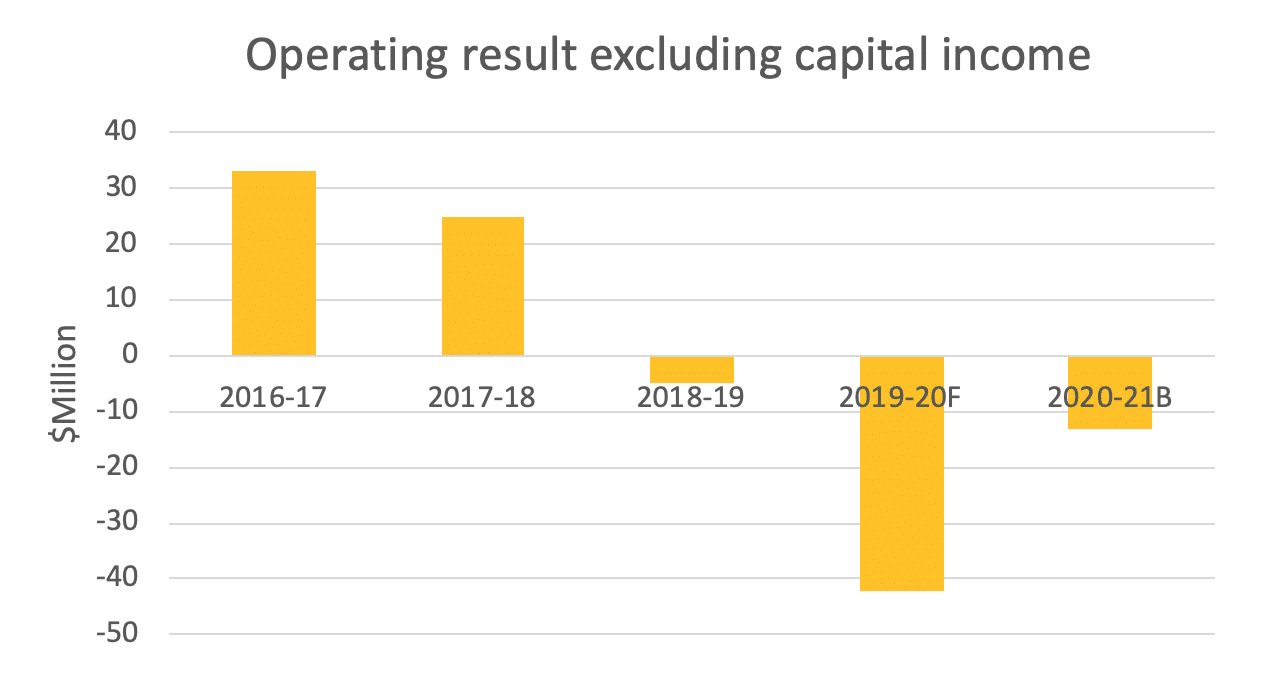 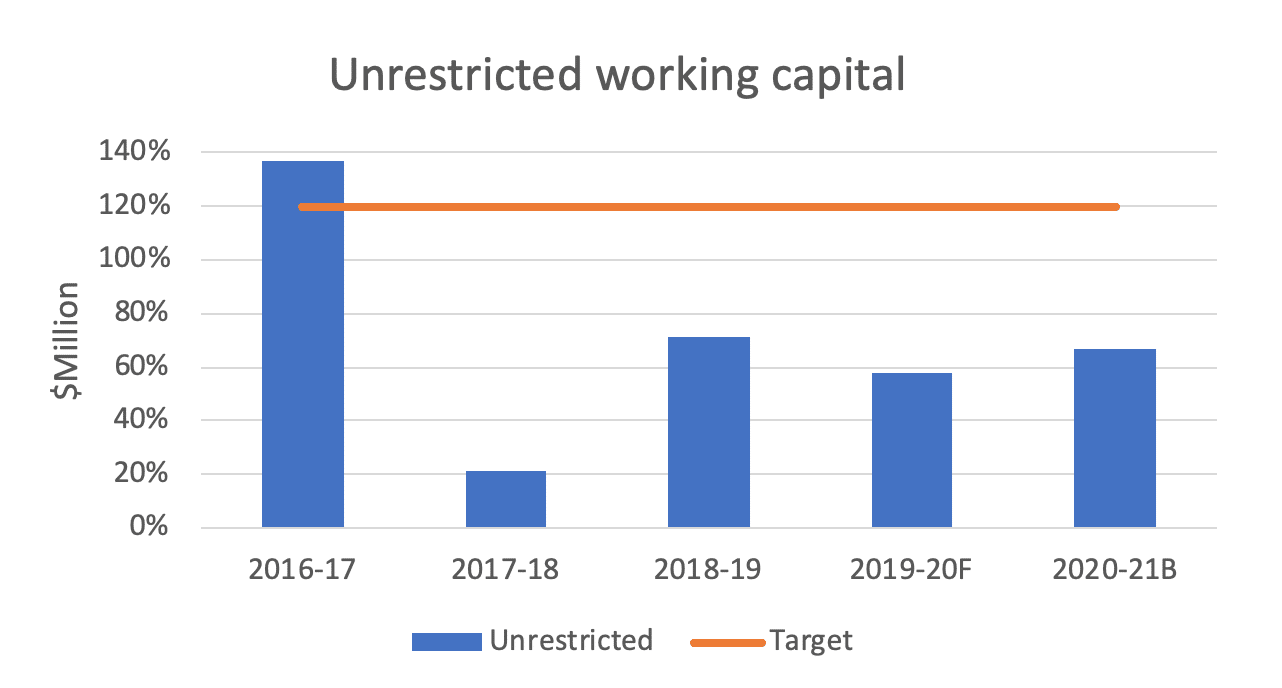 Note: Restricted cash for the 2019-20 and 2020-21 years was not available in the operational plan and so has been set at 55% of cash and investments in line with previous years.

When you exclude restricted funds, Central Coast Council’s working capital ratio has been below the accepted target range of 120% to 200% – in fact, it has been projected to be below 80% since 2017-18, calling into question the Council’s ability to pay its bills as and when they full due from unrestricted funds.

Given this, it is not surprising that DMB Consulting Pty Ltd found that some Council expenditure over the past 12-18 months may have resulted in restricted funds being used, contrary to the provisions of the Local Government Act 1993, to fund its working capital needs. (See: Budget Review Process Report, Central Coast Council Ordinary Council Meeting, 12 October 2020). It also underlines the need to seek an emergency bail-out of $6.2 million from the State Government to cover immediate expenses such as payroll.

Central Coast Council’s financial position has become increasingly precarious since amalgamation in 2016, and the combination of financial shocks from drought, bushfire, storm events and the pandemic in the 2019-20 year have hastened its path toward financial unsustainability. Only the existence of substantial restricted funds sitting on its balance sheet have allowed it to appear to operate as if it were financially sustainable. This highlights the need for sitting Councillors to ask the hard questions of officers when there is an obvious disconnect between the projected future and the stark reality of the current situation.

Activating our communities: the importance of supporting community infrastructure

Localisation, sustainability, and resilience in Newcastle, Australia: Harnessing the power of Anchor Collaboratives

This briefing is the final in a four-part series exploring opportunities for Local Government to grow local productivity and place-based wellbeing by intentionally adopting Anchor approaches and is based on the research project Localising Supply Chains commissioned by City of Newcastle, Australia.

Municipal bonds are a financing tool potentially well suited to address infrastructure investment gaps for local government, having been used by cities in the US to fund large scale, capital-intensive projects since the 1900s. This case study is taken from LGIU’s report Exploring Economic and Enterprise Opportunities from Climate Action.