This briefing sheds some light on the spatial impacts of the COVID-19 pandemic response on disadvantaged communities; in this case, Greater Sydney, using Small Area Labour Market (SALM) data and will be of interest specifically to councillors and local government officers across the Greater Sydney region and wider NSW.

2020 was a year full of challenges: COVID-19, and the federal and state governments’ responses to it, had a significant impact on people’s lives. In New South Wales, the labour market has been significantly impacted, with seasonal unemployment rising from 4.6 per cent in January and February 2020 to 7.1 per cent in September 2020. As of February 2021, unemployment remains elevated at 5.6 per cent.

This briefing aims to shed light on the spatial impacts of pandemic responses on labour markets across a metropolitan region; in this case, Greater Sydney, drawing on Small Area Labour Market (SALM) data.

This builds on earlier work undertaken by SGS Economics and Planning looking at the spatial impacts of the pandemic and the initial national lockdown. This work found that, due to the varying structures of regional economies around Australia, some regions were impacted more than others. Regions with large numbers of workers in the retail and hospitality sectors were identified as potentially more vulnerable. More detail is available in this LGiU Australia briefing.

COVID-19 has resulted in hundreds of deaths across Australia, primarily in older age cohorts. However, a range of non-health-related impacts have arisen as a result of the pandemic and associated policy responses. When it comes to labour force impacts, these have disproportionately impacted socioeconomically disadvantaged communities. Workers in socioeconomically advantaged regions were, in general, insulated from the worst of the labour market impacts. However, in lower socioeconomic status (SES) regions the impact was significant, as they experienced large numbers leaving the labour force and significant losses of employment.

In these lower socioeconomic status communities, there is potential for the impacts of increased unemployment to be significant –  which will have ramifications for those responsible for addressing the associated social problems thereof. Understanding the extent of labour force impacts in already vulnerable communities can help direct efforts by local community service providers and local government to minimise impacts on those individuals and communities most affected.

Using SALM data, this briefing looks at changes in the size of the labour force and total employment for metropolitan Sydney SA2s between September 2019 and September 2020.

Australian Bureau of Statistics (ABS) SEIFA[1] data from the 2016 Census is used as a proxy for a region’s socioeconomic status to understand whether disadvantage helps to explain variations in labour market performance across space.

There are four different categories of SEIFA, each of which measures disadvantage from slightly different perspectives. Recognising that this analysis is concerned with labour markets, SEIFA-IEO (Index of Education and Occupation) has been used, which is driven by employment and education-related variables. This index is suited to analysis of relative advantage and disadvantage as it pertains specifically to labour markets.

Understanding the economic impacts of COVID-19 on disadvantaged communities

The relationship between these employment variables (total employment and size of the labour force) and SEIFA-IEO has been mapped (below) via a scatterplot to determine the strength of the relationship. In these charts, the blue dots represent Greater Sydney SA2s. Those lower on the vertical axis are lower SEIFA-IEO SA2s, while the horizontal axis shows total employment / size of the labour force.

Figure 1. SEIFA-IEO and change in total employment over the year to September 2019, Greater Sydney SA2s 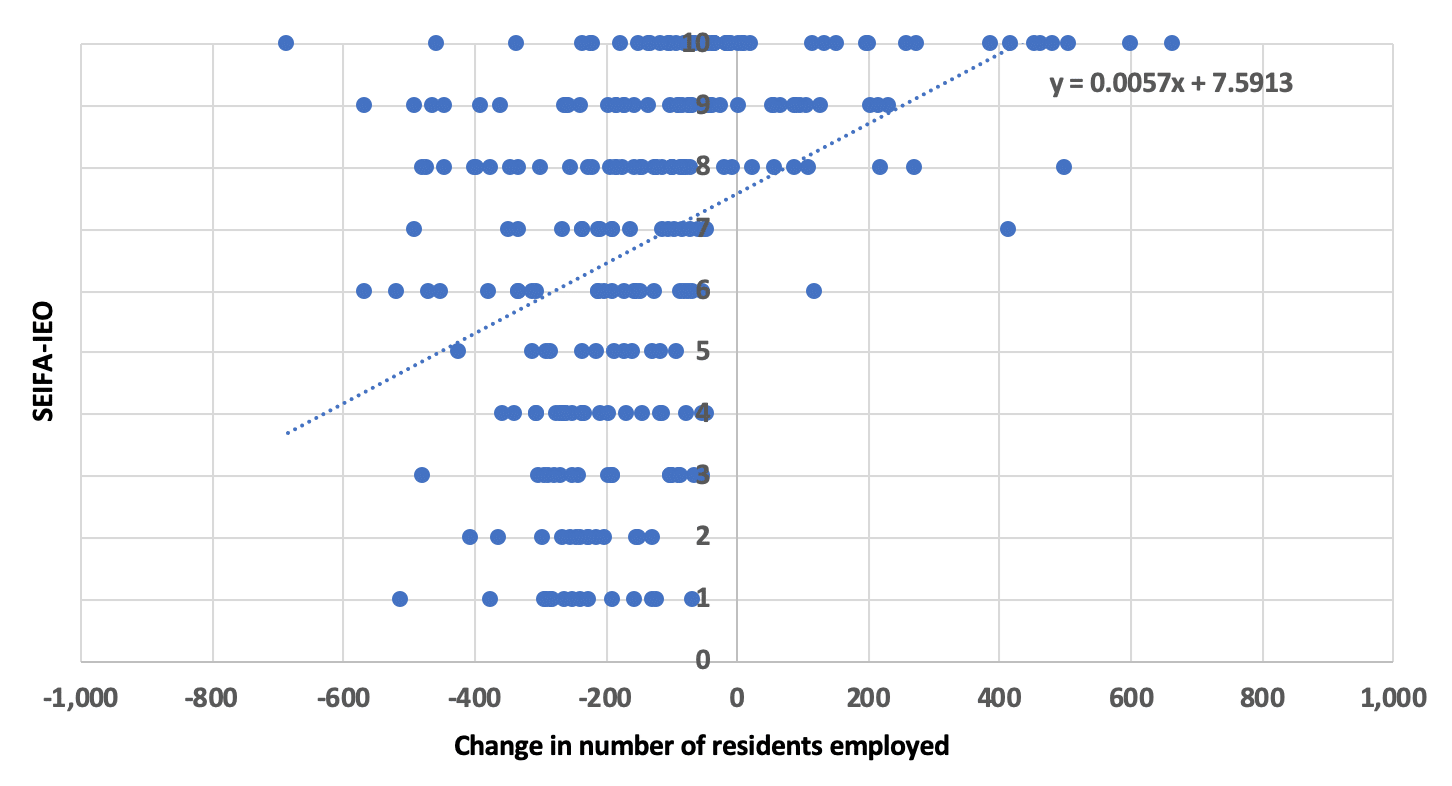 It has become evident that employment in relatively unskilled sectors, such as many of those linked to tourism and food and hospitality, were hard hit by business closures and intermittent restrictions on movement. Across Australia between February and November 2020, a combined 210,000 jobs were lost from the Accommodation and Food Services, Manufacturing, and Health Care and Social Assistance sectors. On the other hand, employment in predominantly high-skilled sectors of Professional Services, Education and Training, and Financial Services grew by just under 40,000.

Reviewing changes in the labour market through the lens of employee skill levels shows that across Australia, there were around 140,000 fewer people working in November 2020 than there were in February 2020. Despite this decline in overall employment, the number of employed people with degrees actually grew by 180,000 over the period. At the same time, the number of people with diplomas, certificates, or high school educations fell by a staggering 320,000, an indicator of the impact of COVID-19 on engagement with education.

Workers’ job security is an additional consideration. Firms across all sectors laid off workers over the course of the year in response to, or anticipation of, tougher business conditions. Many people have low job security, some because they are employed under relatively flexible employment contracts (i.e. they are casual), and others because their relatively low skill base makes them relatively ‘dispensable’ under adverse economic conditions. In 2020, these individuals were most at risk of job losses.

The size of the Greater Sydney labour force fell slightly over the period (declining by around 17,000 – or 0.6 per cent) – however these losses were not shared evenly across the metropolitan area. Analysis of data at the small area level reveals growth in many high-SES SA2s (as indicated by a high SEIFA-IEO ranking), and decline in the least advantaged regions.

Figure 2. SEIFA-IEO and change in labour force over the year to September 2019, Greater Sydney SA2s 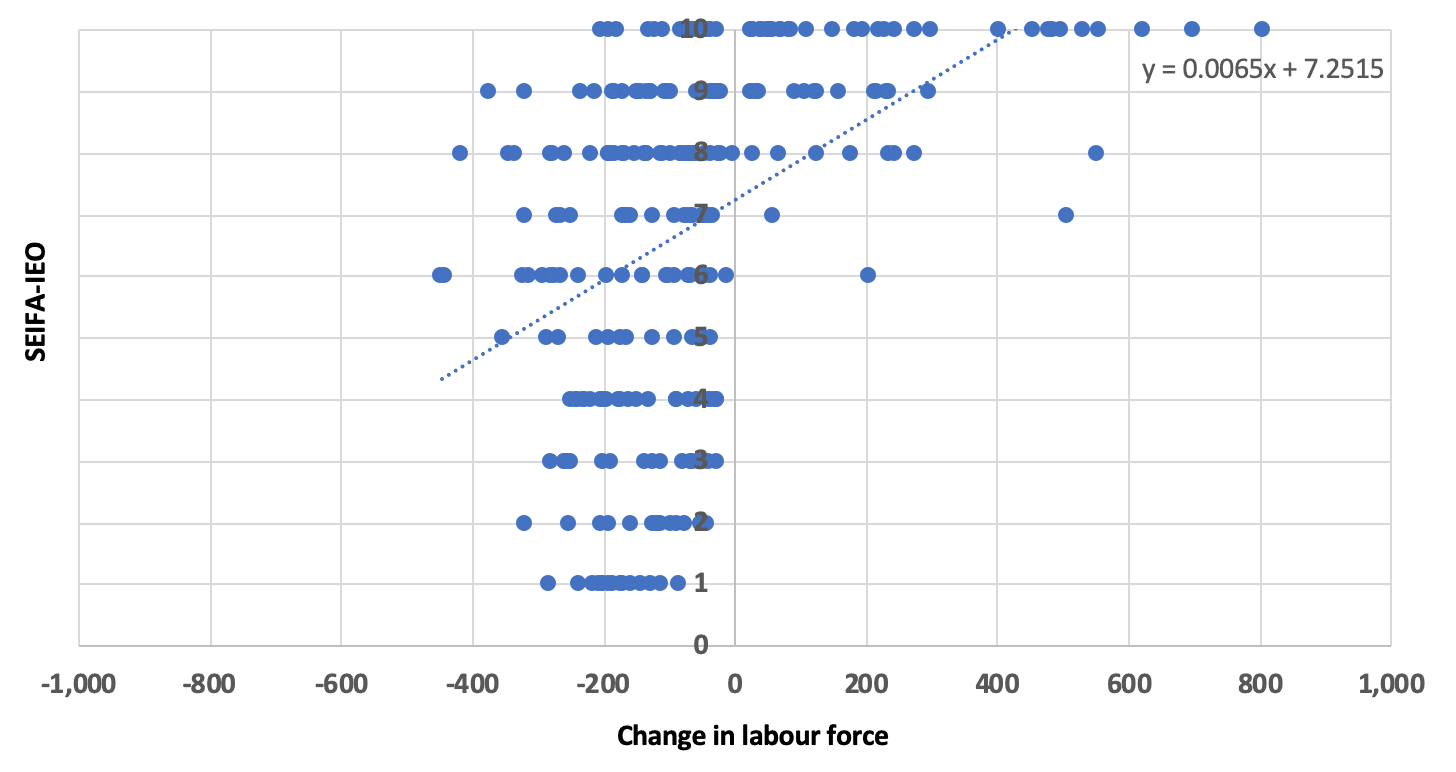 A review of labour force data suggests that the parts of the economy that grew through 2020 tended to be those that required skills more readily found in high-SES regions, and in turn where those areas where the number of employed residents was more likely to have grown. The reverse was true of low-SES regions, all of which experienced declines in the number of employed resident workers.

The differing impacts of COVID-19 and associated restrictions across Sydney’s regions are highlighted in the following table. The table compares the labour market performance of a selection of Greater Sydney regions.

As the threat associated with COVID-19 has waned, the Australian economy has undergone a partial recovery, with a net increase of around 400,000 net jobs between September 2020 and February 2021. Around one-fifth of these jobs have been created within New South Wales. This being the case, it is likely that employment in lower socioeconomic communities will have bounced back somewhat. That said, the increase in unemployment experienced by many lower socioeconomic status regions in 2020 is likely to be an enduring problem.

This analysis highlights the uneven distribution of the labour market impacts of COVID-19 and associated restrictions. The spatial impacts of changes in employment and labour force participation, reveal the disproportionate impact on employees in lower socioeconomic regions.

Over the past year, a range of government interventions have helped to buffer Australian communities from the worst impacts of the events of 2020. However, with these to be progressively withdrawn over 2021, individuals, households, and communities in Greater Sydney’s most disadvantaged areas will be potentially exposed to the reality of an economy with fewer opportunities for lower-skilled workers than perhaps existed prior to COVID-19.

The longer-term impact of the withdrawal of government support measures, at a time of significantly lower employment, is likely to be acutely felt among Greater Sydney’s more disadvantaged LGAs.

This analysis highlights the value in understanding the spatial implications of COVID-19, and the extent to which lower-SES communities have been disproportionally impacted.

Local governments seeking to support their communities may consider how they approach their role in local economic development. Areas of focus may include:

Understanding the economic impacts of COVID-19 on disadvantaged communities, and working with government to target responses that better reflect the needs of these communities will be an important part of economic recovery.

Loans for Victorian local governments to improve services and infrastructure

This briefing is focussed on guidelines fromthe new Local Council Lending Framework, which provide an outline of the key steps, milestones, and criteria for Victorian local governments to successfully access loans from TCV, and how councils can make best use of this new low-cost funding source.

This is the second briefing in our series on the nexus between governance, recovery, and economic transitions. Dr Anne Tiernan explores strategies for driving economic regeneration, regional productivity, and innovation. It reviews research and emerging economic thinking about the enablers of economic growth outside of the major capital cities – the primary engines of employment…

This briefing shows how a structured approach to strategic risk management can help leaders to develop their post-pandemic strategies, plans and activities, by using a risk ‘lens’ to compliment objective-based approaches.