In the context of planning goals, the need to maintain vibrant centres that can deliver a range of services and employment opportunities is critical. This briefing seeks to highlight the vulnerability of suburban centres to the changing retail environment, and the social and economic consequences.

The majority of jobs in suburban centres in Australia are in the retail and food and hospitality sectors. Therefore, ongoing declines in ‘bricks and mortar’ retailing in Australia are likely to have significant implications for the function of the current centre networks.

In recent years, ‘bricks and mortar’ retailers in Australia have experienced significant challenges, with more recent limitations on people’s movement (and various other restrictions) limiting these retailers’ abilities to operate at capacity. In contrast, online retailers have thrived, with this form of retail becoming a far more appealing prospect for a significant number of Australian consumers. As we move beyond 2021, these challenges will only increase.

In coming years, centre hierarchies will come under pressure as metropolitan centres compete for a diminishing quantity of per capita ‘bricks and mortar’ retail expenditure. To see this as nothing more than ongoing evolution in consumer behavior ignores the fact that strong and viable centre networks deliver a range of other benefits. A decline in the role of centres in the economic and social lives of local residents would come at a significant cost.

The purpose of this briefing is to set out how broader trends will coalesce with the impacts of COVID-19 to place unprecedented pressure on the ongoing viability of Australia’s centre networks. This briefing seeks to highlight the vulnerability of many of our suburban centres to the changing retail environment, and the serious consequences of inaction.

Why do we need local/activity centres?

Retail centres are vital to the economic, social, and political fabric of Australian communities. Flourishing local centres are an important source of suburban jobs and are home to hundreds of thousands of small businesses. In addition to their economic role, they are also social places that bring us face to face with ‘the other’. In this sense, they can be seen as important institutions that play a role in supporting democratic and egalitarian values.

By bringing together disparate groups, local centres can be places where ideas are exchanged, where the growth of social networks are fostered, and where prejudices are challenged. As our communities grow older and single and dual person households become increasingly common, vibrant networks of activity centres will become an important tool in staving off loneliness and supporting mental health.

In short, a reduction in the role of centres is much more than an economic issue.

As has been discussed previously, the retail sector faces challenges going forward. Many of these were already present prior to the 2020, though most have been exacerbated by the pandemic. These include: 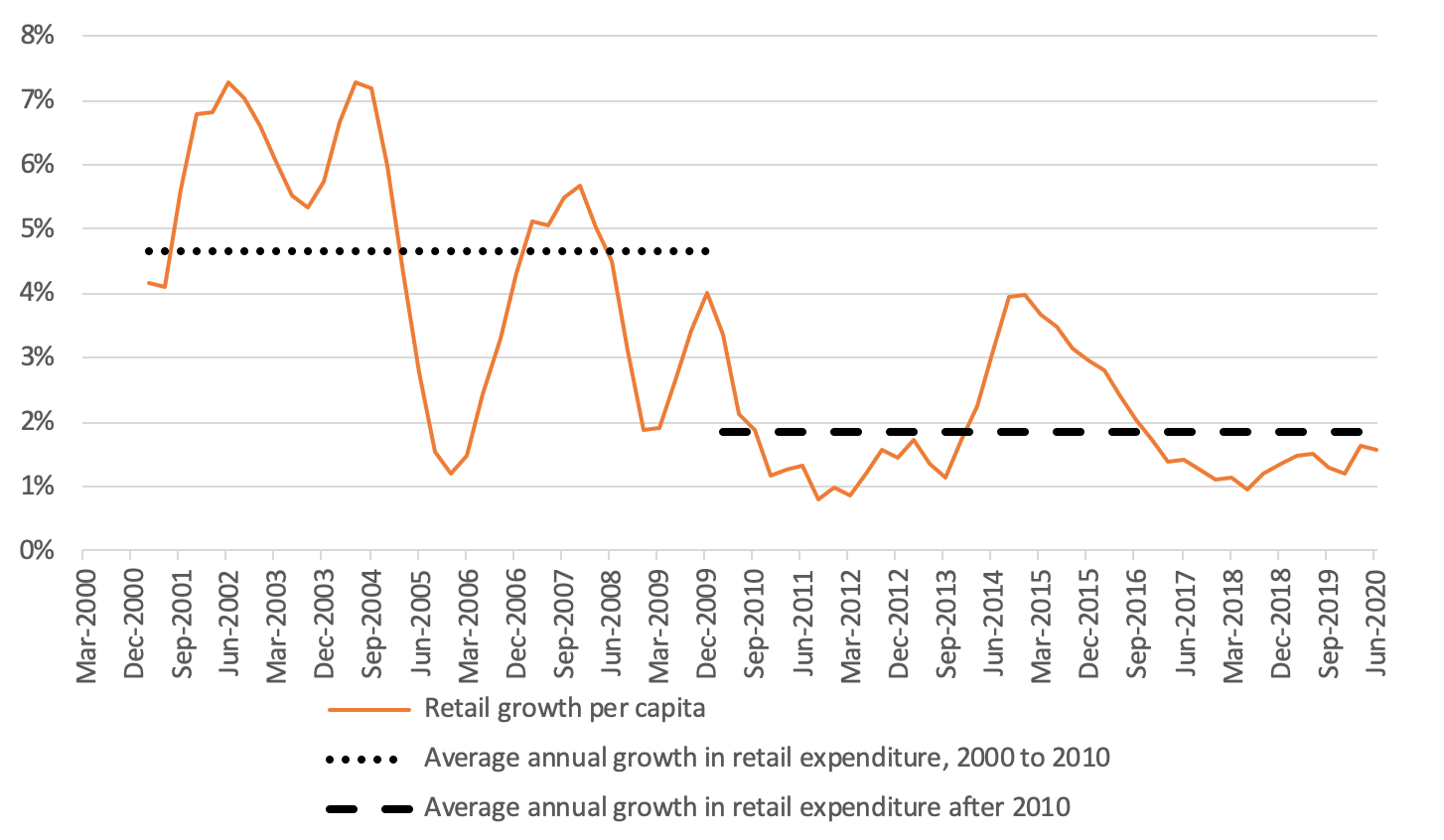 Broken down in subcategories, we see expenditure growth and decline varies within the retail category. For example, the ‘cafes, restaurants and takeaway’ and ‘food’ categories have fared reasonably well over the past decade, while growth in ‘non-food’ retail categories has been much lower.

It is important to remember that ‘non-food’ retailers will be far more vulnerable to the loss of expenditure online, with this fact compounding the challenging retail trade conditions endured by these sectors in the past decade.

The impact of online expenditure on ‘bricks and mortar’ retailers

Data gathered by the ABS shows that online expenditure is taking an ever-increasing share of the retail pie, with monthly online retail expenditure growing from $9.2 billion in December 2015 to $25.2 billion in June 2020.

Taking into consideration the loss of expenditure online, we see that growth in per capita expenditure in ‘bricks and mortar’ retailers has grown much slower than total retail expenditure, with negative growth recorded in a number of quarters in recent years.

Figure 3. Annualised per capita growth in retail expenditure, total vs ‘bricks and mortar’, 2016 to 2020 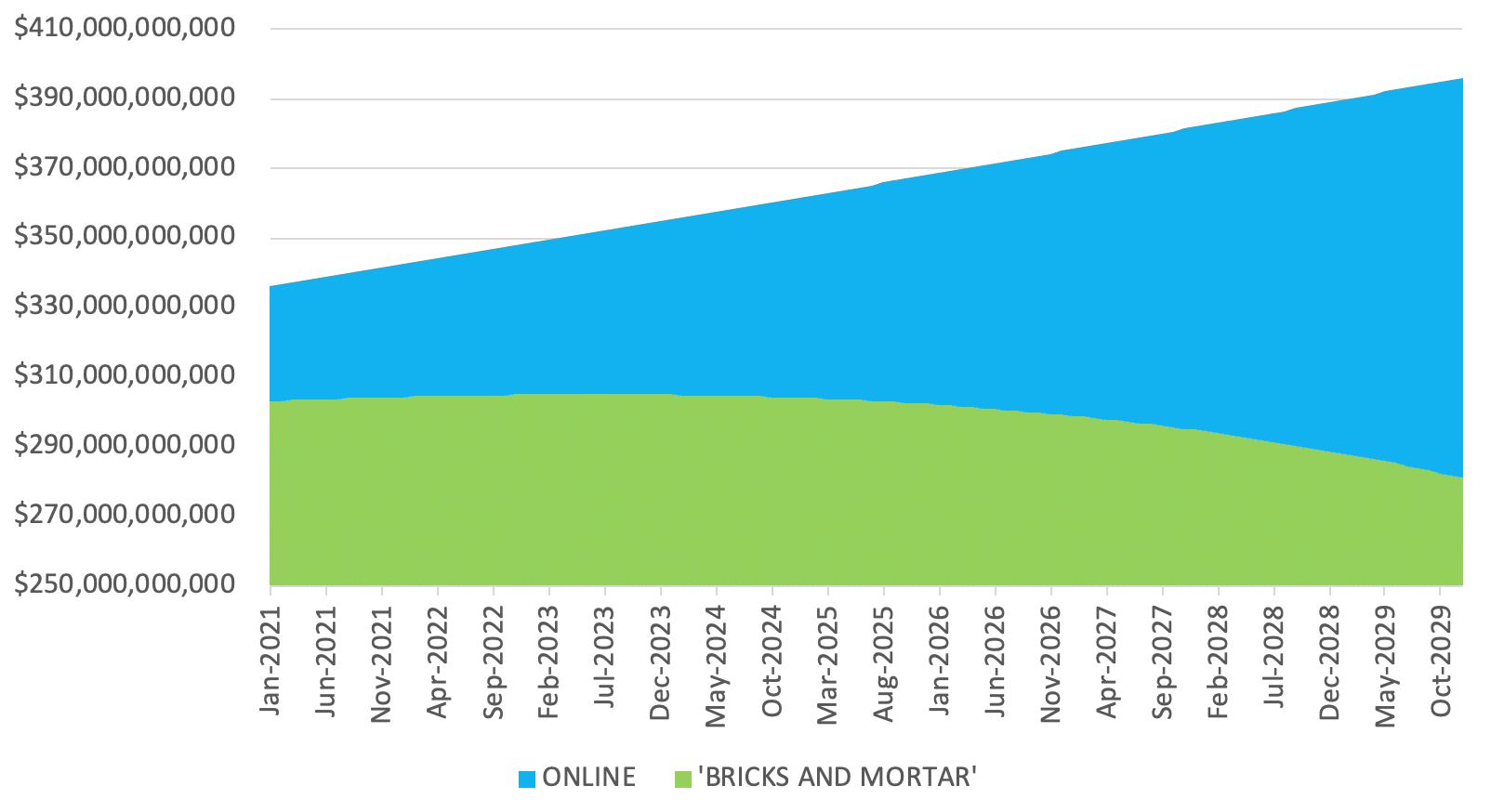 Of course, these assumptions could be considered conservative. The reality is that online expenditure could grow significantly faster, and that the share of expenditure going to ‘bricks and mortar’ retailers declines even more rapidly.

These possibilities (and their implications) are rarely acknowledged in retail centre planning, though if we are concerned with planning to meet the essential social and economic needs of future generations, they must be.

What does this mean for local government?

Over recent decades, centre planning has been predicated on the idea that a certain quantity of retail floorspace is required for every ‘catchment’ resident. An effective decline in per capita floorspace requirements means that we are quite possibly moving into an era in which there is a structural surplus of retail land in our centres. This has widespread consequences for local governments and planners, including:

What can local governments do?

As discussed, past retail planning has been based around a set of assumptions that no longer hold, and most of our local/activity centres are laid out in a way that fails to recognise the emergence of a new retail paradigm.

Ongoing evolution in the retail environment, with these changes exaggerated by the COVID-19 pandemic, means that Australian retail centres, most of which were established to meet the needs of consumers in a pre-internet world, are set up to potentially fail, with surrounding communities likely to bear the economic and social costs.

There is an opportunity for local governments to take a proactive role in preparing their centre networks for these changes. Steps local governments can take now to secure their activity networks in the face of the changes to come include:

Retail centres in Australian cities serve important social and economic functions. The growth of online retail, however, in conjunction with a number of other trends, means that per capita ‘bricks and mortar’ retail expenditure is likely in a state of decline, and that these declines will accelerate in coming years. With less expenditure finding its way to centres, our metropolitan centre networks will face serious viability challenges. This is particularly the case for lower-amenity centres in some of our more disadvantaged regions.

There is an opportunity for local governments to be proactive in how they respond to these changes. This includes revisiting pre-pandemic assumptions around floor space requirements, to be clear on what realistic targets look like. There are a number of interventions that local governments can explore using this now-vacant space for, such as a markets, co-working spaces, accommodating the shift to health and wellness (as will be discussed in a future briefing), and potentially higher-density living. Ultimately, any response will require a concerted response from across council. This requires strategic plans and land use controls that set clear and realistic expectations, supported by economic development practices around relationship-building and curation of spaces and activities to create lively centres.

By acting now, local governments can ensure that centres are set up to weather as best they can the challenges of the next decade.

Since March 2022, approx. 70,000 Ukrainian refugees have come to Ireland. This briefing looks in particular at how Clare County Council has managed the various national and local refugee initiatives (such as Offer A Home) and the challenges they’ve faced in the resettlement process.