The NSW Government has accepted all 29 recommendations for significant reforms to the infrastructure contributions system made by the NSW Productivity Commission in a report late last year.

“Solving the uncertainty of infrastructure contributions was one of four pillars of our Planning Reform Action Plan. That’s why we’re adopting the Productivity Commission’s recommendations in full to build a more timely, transparent and certain planning system”, announced the NSW Planning Minister

The 29 recommendations address many areas of the contributions planning system in NSW, affecting both State and Local Government funding from growth and development towards the provision of infrastructure and facilities.

Previous LGiU Australia briefings on this topic include:

Key reforms that should be emphasized as being of particular interest to local government include the following:

The reform implementation will be based on a roadmap for rollout, captured in the graphic below: 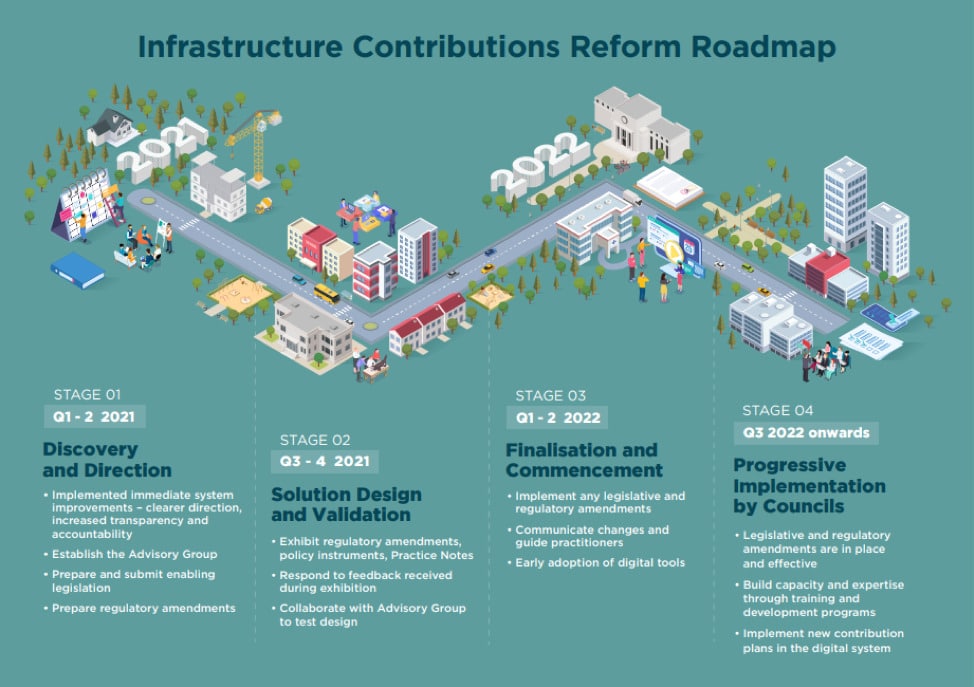 Discussion of the key reforms to development contributions system

From a State infrastructure contributions perspective there are several proposed major reforms, particularly the introduction of value capture mechanisms.

The other reforms for State government contributions are in the development of Regional Contributions (including Greater Sydney Region) that would allow for more consistent application than the current Special Infrastructure Contributions (SICs), and that are variously applied to specific areas. These will be at a flat rate for each identified Region. The direct land contribution mechanism has also been established, introducing a statutory charge when land is rezoned, which may also assist in ensuring that land is provided for transport corridors and open space in greenfield areas.

From a local contribution perspective, a key issue will likely be the restriction of the types of infrastructure and facilities that feature on the ‘essential works’ list (to be reviewed by IPART), and the resulting limiting of the use of development contributions. More positively, the changes to the application of the flat rate s.7.12 levy (which is administratively simple to apply and manage) may lead to an improved funding environment for infrastructure and facilities, to support infill development in urban established and low-growth areas. While the retention and increase of the s.7.12 levy (in essence a development licence fee) is positive, the flat-rate application allows for simplicity but leads to a less equitable application than the percent-rate application on the value of development approach.

The restriction in flexibility for the use of Voluntary Planning Agreements will also potentially have an impact on their use by local governments – for example, they will not be able to be used in negotiating an affordable housing contribution based on a council’s affordable housing policies.

The potential changes to the rate-pegging approach to allow Council’s general income to increase with population growth, will be important to consider in greater detail, as will be the encouragement of the use of forward funding of growth infrastructure and use of debt financing (which may promote greater intergenerational equity but may lead to concerns due to the risks associated with predicting rates of development-related income). Linking the EP&A Act development contributions system into the Local Government Act IP&R approach will lead to better integration overall in what can be a disconnect currently between management of growth infrastructure and contributions funding from strategic asset management and resourcing planning.

A number of these topics will be the subject of more detailed analysis in future briefings.

The reforms endorsed by the NSW Government go well beyond regulatory tinkering or evolving the current development contributions planning system, and include some major initiatives for funding local and state infrastructure and facilities, pursuing value capture, as well as greater simplicity using flat-rate charges.

However, at the same time there are elements (such as the wider application of the essential works list from IPART, and the narrowing of the use of voluntary planning agreements) that will constrain local government budgets further than what can currently be funded by development contributions.

Notwithstanding, there are many opportunities for local governments in the reforms – including elements that will simplify the use of contributions using flat rate charges, achieving better integration with local council IP&R frameworks under the Local Government Act, as well as engaging with longstanding issues around rate-pegging impacts on local council financial sustainability and the use of debt finance for forward funding growth infrastructure.

Since March 2022, approx. 70,000 Ukrainian refugees have come to Ireland. This briefing looks in particular at how Clare County Council has managed the various national and local refugee initiatives (such as Offer A Home) and the challenges they’ve faced in the resettlement process.