It is not often that one can write about being in four different countries in one day but I recently enjoyed such an experience while visiting the City of Freiburg in Southern Germany. I was visiting with a group from Galway, which is looking to establish itself as a thought leader and a pilot for the transformation of Ireland’s low-density cities into vibrant, sustainable, economically, and environmentally successful urban centres for the future. The work centres on the recently published, Galway 2070 – a long-term vision of how the city might be, put together by the Irish Cities Group.

More correctly named ‘Freiburg im Breisgau‘ to reflect its closeness to the Black Forest, the proximity of the borders of Switzerland, France and Germany did mean that I could have breakfast in one country, stop for a coffee in another and fly out through another to return to Dublin in time for the Rugby International between South Africa and Ireland!

The point of my own specific visit was to check out the continuing progress in the greening of one of Germany’s richest cities, a city of some 232,000, which has become something of a wonder city in terms of its implementation of long-term planning strategies, notwithstanding changes in political representation from local to Lander to Federal Republic levels. With over 30 years of scenario-led planning – underpinning long-term investment, led by the city council and a clearly engaged population – the City has utterly transformed itself from being an average middle-sized European city area into one of the most dynamic, sustainable city regions globally. So much so that over 25,000 city leaders and others interested in sustainability and economic vibrancy come to see what is going on in the City region every year… yes every year! 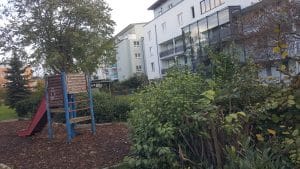 They come to see what might be learned from the experiences of the past three or more decades. One thing worth noting is that the people in the City and its institutions do not claim to have found the answer to sustainable development but rather are clearly at pains to emphasise that what they do works for them and all other cities must find their own vision and do what works for them and their population. All the more reason for seeing what they are doing, and what they are doing is nothing short of impressive.

A business location which is home to some 11,459 companies with 121,197 jobs, the area has seen its population increase by around 18,000 people in the past decade. As a consequence, it has 130,000 apartments while some 72,000 employees come into the city daily to work. Within the city you will find over 5,000 hectares of forests, meadows and vineyards along with tram lines that have stops within 400m of every, yes every, apartment, installed over the past three decades and still expanding into the nearby villages which in turn are connected by clockface bus services into the towns and villages in the wider region (for more really interesting data have a look at the Council’s statistical yearbook).

The broad planning principle of being a ‘’city of short distances’’ means that every apartment must be within walking distance for everyone. This clearly requires planning rigour with the acceptance that, as one of the leading planners of the city over the three decades put it, planning hurts but lack of planning hurts more. 30km/h speed limits are now largely found across the full extent of the city while the historic city centre, largely destroyed during the second world war is now fully restored to something of its former beauty stripping out 4 lane motorways to be replaced by a 40-hectare pedestrian zone. Car parking generally across the city is increasingly restricted, on delivery of their integrated transport plans and many of the city’s housing areas are now largely pedestrian with some having a total ban on cars and other non-essential transport modes. 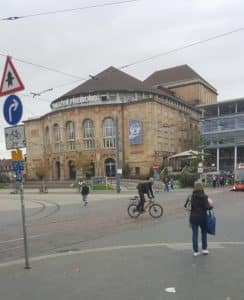 One thing that really struck me was the resourcing of this transformation. Capital investments are expected to provide a return to the City and while they can access Lander and Federal State Funds, they do so within the context of a planning process that looks decades ahead, is scenario informed (some 6 such at the moment as it looks to its Development Plan 2040) and has a clear focus on population participation and integration. Some 70-plus City Officials under the leadership of the directly elected Mayor, Martin Horn, look forward on a consistent basis, changing as changes occur, whether local or international, always alert to the impact of what is occurring around and within the City but always with a clear focus on meeting the long-held ambition of a green sustainable and economically independent city region. The only people that can meet local current and future expectations are the people of the city and their leaders. Berlin can watch on, and contribute when it gets the appropriate business case for a tram line or other infrastructure, but always a case that is essentially self-financing for running costs. 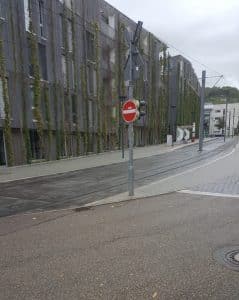 At the heart of the policy processes are 59 goals which drive policy delivery from health to education, from residential development to economic growth. Housing policy is particularly impressive, it would take a very close look to see the differences between private housing (a 2-bed apartment costs about 650,000 euro) and social/affordable housing. Student accommodation is side by side with such accommodation as is provided for the City’s population of people with alternative lifestyles. Homelessness in such a wealthy city is an ongoing challenge and the response is led by a public health care perspective, while older people and children are a policy priority. The City had and continues to have a large influx of refugees and seems well-positioned thanks to long-term investment in serviced sites to be able to provide extensive and very comfortable accommodation including the world’s first passive high-rise facility. 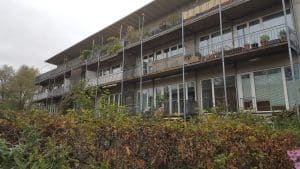 Passive housing along with increasing carbon-positive public buildings are now the norm in the new stock of the city while extensive retrofitting of both public and private building stock is now very advanced. Indeed, within the city centre, the Council has developed a small hydroelectric plan to generate 100,000KW of electricity every year and the Council’s own offices are capable of energy independence.

The overriding impression of Freiburg is of a city with a huge vibrancy, confident of its own identity and culture, equipping itself to be both competitive and future-orientated, an exemplar of what might be possible. The same could apply to all the Irish Cities and with that in mind, the Academy of Urbanism is hosting a conference in Galway next April. Details will be made available to LGIU Readers as soon as they become available. But to conclude is it worth thinking that Galway and other Irish Cities might possibly overtake Freiburg on the increasingly urgent march towards a sustainable future, or is it just an unachievable pipedream?

All Things Ireland: Outcomes from COP-27

Welcome to All Things Ireland, LGIU Ireland’s weekly collation of everything local government in Ireland. This week we bring you the latest reports and updates to kick start your 2023 in local government.

Outcomes from COP27 – the successes, failures and lessons for Ireland

This briefing focuses on the key outcomes of the COP27 in Sharm El-Sheikh, in particular looking at the relevance for national and local government in Ireland as they continue implementing the 2021 Climate Action Plan.