Chris Clarkson, MP for Heywood and Middleton and APPG Chair, welcomed attendees and introduced the APPG’s first virtual meeting to discuss local funding implications after Covid-19. He outlined the dual nature of the conversation: how are things working for local government and what are the key learnings for health and social care. 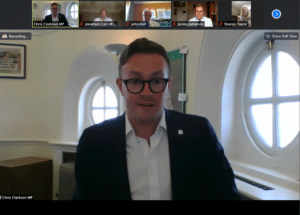 Jonathan gave an overview on the state of local government finances, acknowledging that the financial situation for local government, as for so many parts of the public and private sector, is challenging as Covid-19 has presented many new problems. In looking at these challenges, local government must not only consider the scale of the challenge and lost income, but also what this means for the future of council funding, and where lobbying needs to be done. He also questioned what LGIU should do, on behalf of its members, and think about in regard to the longer-term funding picture. 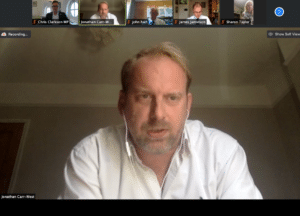 Cllr John Hart presented on what local government in Devon is currently doing and what they need to provide and improve services in a post-Covid-19 context. Devon has received £706m of government funding for communities and businesses since the beginning of the pandemic, with Devon County Council receiving £57.9m of support, the most significant of which was the Local Authority Support Grant (£41.4m). £1m of Devon County Council’s funding has also gone to Devon District Council for short-term support of those in financial hardship. While the council did maintain a low infection rate, over 33,000 residents were isolated, with over 5,000 receiving food parcels and 333 care homes being supported.

Additionally, 21,900 people were on jobseekers allowance in June compared to 8,300 in February, while 32% of the workforce has been furloughed. Response commitments over this period were wide-ranging, and the grant was also needed to offset the impact of estimated budget savings plans that will no longer be deliverable as set out in February. The total agreed value of these interventions is currently £45.3m, which is £3.9m more than the support grant received. This pressure will increase on a monthly basis as more recovery measures are introduced. In terms of intervention by service area, the majority of funding has been directed into adult health and social care (52%) and 14% has gone into children’s services.

Covid-19 has had an unprecedented impact on local government’s financial stability. The level of uncertainty created around expenditure planning, income collection – particularly from council tax and business rates – and government funding expectations has never been so great. A high-level review of financial planning by Devon County Council estimates that there will be a potential deficit in costs of around £52,566 before loss of core funding or recovery spending. Certainty is needed around future funding: details and timings for a funding settlement should be made known earlier – preferably closer to September than December. Funding settlements should be set out for the next four years so that local authorities can confidently plan further into the future. Team Devon can only play its part in rebuilding and regrowth with the right support from the government. 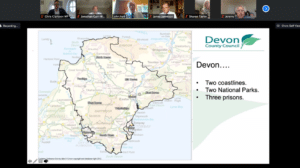 Cllr Taylor outlined the issues being faced by a district council and how Stevenage has supported the front-line and discretionary services that make a difference to quality of life while having the planning powers and economic growth agenda to make a large contribution to recovery. At the beginning of the Covid-19 pandemic, the government stated that local authorities were to do ‘whatever is necessary’ to support communities and funding would be provided where needed. Cllr Taylor said that, “while local government has stepped up to provide the essential services needed and delivered additional services, the government has not held up their end of the bargain.”

Cllr Taylor underlined how Stevenage has been a shining example of “over-performing” during the pandemic. The council delivered 600 food parcels and raised £56,000 through the Stevenage Community Trust, while rapidly distributing £18m to 800 businesses in the area, and tackling the spike in domestic abuse seen as a result of lockdown (90% more referrals during this period) among many other successful services, and planning for local lockdowns and distancing.

However, if there is no financial reform by the end of July, there will be a £5.8m funding gap due to Covid-19. This will increase to £11m if this continues for the rest of the year; Stevenage has a net budget of £9.3m made up of increased costs and loss of income. To date, only £1m has been received from the government. Cash flow problems exist as business rates and council tax payments have to be paid whether they are received or not. Government allocation of funding seems unlikely to meet these losses. The losses set out do not include the costs of preparing for and supporting local outbreak plans. 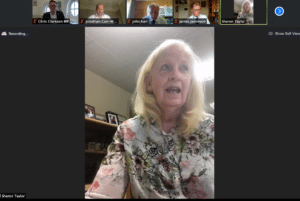 The Chairman thanked the APPG for raising these issues in parliament. He then thanked the sector for its hard work during the crisis, especially around protecting the vulnerable, providing support to the elderly and carrying out normal services. He said, “the crisis demonstrates that councils can and have delivered in a way that many parts of the public sector do not.” Polling consistently shows that residents trust and are satisfied with their councils and local area, demonstrating public recognition for work being done.

Cllr James Jamieson discussed the LGA’s recently launched report, ‘Rethinking Local’ to discuss issues of funding and devolution and how recovery relates to this. Local government is faced with an uncertain future as a result of the crisis, after a decade of already reduced funding, followed by high costs. With spending standing at approximately £11bn and government funding at £4bn, there is a significant shortfall. Given the context of Covid-19, while some councils have brought forward emergency budgets, this is not the right thing to do when looking at recovery and to the future. Local authorities require adequate long-term funding to understand their position and future funding, as well as having the essential powers to enact the necessary change. 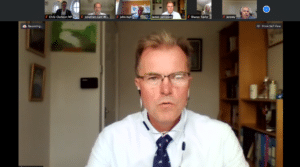 Following updates from the panel, the Chair asked guests to participate in a discussion on the topic of local authority funding.

Rachel Hopkins MP noted that, since being elected, it has become clear that central government does not have a full understanding of local government’s role. She highlighted that local government has been hampered for many years by funding cuts, and stated that this has had a knock-on effect on the sector’s ability to help communities during the pandemic, despite impressive efforts made by councils. The Chair agreed that local authority funding has been slashed and that the government needs to have a greater understanding of this issue.

A Leader from the South East argued that the issues of Covid-19 and longer-term local authority funding are separate (though connected) as the health crisis was a ‘tsunami’ atop an already broken system. The Leader considered the problem of council tax increases, which are restricted by central government, resulting in limits on income and spending. The Leader proposed introducing restrictions based on population size or the number of units in an authority. They stated that funding from national non-domestic rates (NNDR) is low, as it is reallocated by the government. The Leader gave the example of an adjacent council that consequently lost income from NNDRs. Councils that had streamlined services prior to the crisis are now in a poor position as there are no more savings to make. Therefore, “central government should bear responsibility for helping authorities”. The Leader also expressed a need for new systems to raise money locally.

The Group heard from a Leader from London who agreed with the LGA Chairman’s earlier points and explained that, while funding from the government had been welcome, there is a funding hole due to the losses incurred from the crisis, particularly around leisure and property industries. The crisis emphasised how centralised England is – a process that previous governments have contributed to, no matter their political allegiance. The Leader posited that, were councils to keep business rates and council tax as a means to generate income, they would need serious reform which is politically difficult. They stressed the importance of linking devolution to the wider debate around finance, as, while effective, transferring powers and budget out of Westminster will be a complex undertaking.

There was some consensus from a Leader from the South East, however, they suggested that restructuring is simply a distraction if the financial issues are not addressed first. The sector has demonstrated its capacity to problem-solve but does not have the powers to support its communities properly. The Leader discussed a leisure centre that has raised new income for the council as an example of innovative income generation. At the same time, the authority has lost £11m (around one-sixth of its budget) during the crisis due to the suspension of parking fees, less use of leisure industries and so on. They expressed frustration at the lack of clear guidance from the government around locating new income streams and argued that, long-term, a review of the financial settlement is the most pressing issue.

A Leader from the South East agreed with the previous point and highlighted the impact that homelessness pressures in coastal communities and the difficulties in extracting money from national bodies (particularly around brownfield sites) have had on council finances.

The APPG heard from a Leader from the South East who concurred with the points raised and drew attention to the Planning White Paper (expected in the autumn) which could prove to be challenging to the sector, as many residents disagree with housing growth. In the Leader’s authority, the local plan is awaiting its public enquiry; the council does not have a large enough land supply, so the plan risks being appealed by developers.

Another Leader from the South East proposed reviewing which services are statutory, rather than demanding more money to fund the same services. A representative from a conservation charity queried what could be done to ensure councils have adequate resources to protect the natural environment, particularly as lockdown has thrown into sharp relief those without access to green spaces.

The LGA Chairman responded to the points raised and agreed that council tax flexibility is important for both local government finances and democracy, as residents should be able to decide on which services they require and how much they want to pay. He added that devolution should be bottom-up and locally-led; if councils wish to restructure, democratically they should have that right. The LGA Chairman also recognised the need for a review into statutory services, as well as more control around local planning and access to money that is not ring-fenced.

The APPG Chair acknowledged the importance of MPs hearing from the sector in order to inform thinking around council funding going forward. He thanked attendees for participating in the session and drew the meeting to a close.