Image by Christine Aubé from Pixabay

This week (Tuesday 24 and Thursday 26 November) we held the third annual LGIU Scotland & CCLA Cllr Awards and eleventh annual Cllr Awards in England. This year, however, was somewhat different. In previous years, we have convened on a night in November at impressive venues in Edinburgh and London to celebrate the achievements of local government across England and Scotland that so often go unrecognised. But, this year we took the decision to host the 2020 Awards virtually due to the ongoing pandemic.

We were joined by Leaders, Chief Executives and other stakeholders from across the sector, as well as our esteemed shortlist and many of their colleagues, family and friends to honour those councillors who have gone above and beyond to support their communities and residents during an unprecedented year. 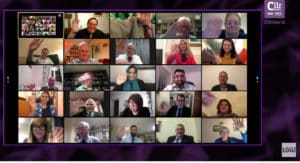 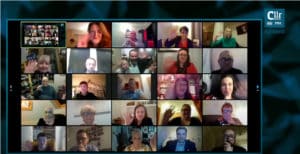 The Awards were presented by Jonathan Carr-West, Chief Executive of LGIU and LGIU Scotland, and Paul Murricane, BAFTA-nominated journalist with a 25-year career in reporting. Guests joined in the celebrations from the comfort of their own homes as the winners were revealed on YouTube Live and over Twitter.

In Scotland, the Minister for Local Government, Housing and Planning, Kevin Stewart MSP, opened the Awards by giving his thoughts on why it is now more important than ever to recognise the hard work of councillors, who have helped communities to survive and thrive while Covid-19 has ravaged the country. We also heard from COSLA President Cllr Alison Evison who reiterated the Minister’s comments, thanking local councillors for their remarkable efforts this year. Meanwhile, in England, LGA Chairman Cllr James Jamieson highlighted the essential role that local government has played during the pandemic and LGIU Chair Cllr Michael Payne spoke about the importance of recognising councillors’ achievements annually.

Jonathan Carr-West said of the Awards, “The Covid-19 pandemic has presented this country with a set of challenges that few could have predicted. However, councillors up and down the country have risen to these challenges for their communities by delivering food parcels to vulnerable residents, sourcing PPE for frontline workers, finding temporary accommodation for the homeless and so much more. Local government has kept the country safe and moving by sacrificing time and energy to ensure vital services can continue and additional support is available to their residents in the wake of an unprecedented health crisis.

It is for this reason that we are particularly proud to unveil the winners for the 2020 Cllr Awards. Their achievements showcase the best of local government at a time when the country faces one of the greatest hardships of our lifetime.”

Montages of all the shortlisted councillors were shown to demonstrate their accomplishments, featuring interviews with residents who have been helped by the councillors’ actions and hard work, along with snippets of the projects being undertaken by the nominees. There were eight categories celebrating local councillors in Scotland, including Community Champion and Lifetime Contribution, and ten winners overall. We were fortunate to be joined by several members of the judging panel, Cllr Malcolm Bell (Shetland Islands Council), Cllr Kirsteen Sullivan (West Lothian Council) and Cllr Shona Haslam (Scottish Border Council), to announce the winners.

There was an additional category in England and eleven individual winners. The Finance and Economic Development Award was awarded to the whole of the sector, in recognition of the challenges that local government has faced this year. Our fantastic judges, Cllr Teresa O’Neill OBE (London Borough of Bexley) and Cllr Ruth Dombey OBE (London Borough of Sutton) each presented an award. Representatives from our founding partners CCLA also joined us to announce winners. Heather Lamont (CCLA) presented the New Councillor of the Year Award in Scotland, and the Innovation and Service Transformation Award was presented by Kelly Watson (CCLA) in England. 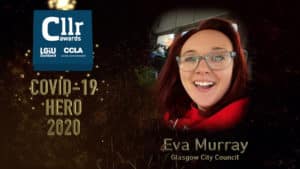 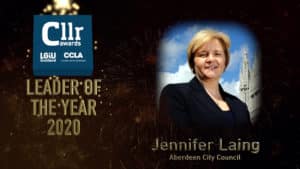 Amongst this week’s winners were Cllr Eva Murray (Glasgow City Council), Cllr Hannah Bithell (Leeds City Council) and Cllr Salma Mumtaz (Nottingham City Council) who all walked away as Covid-19 Heros. Cllr Mark Horsham (South Lanarkshire Council) was given the New Councillor of the Year trophy and Cllr Nick Ridley OBE was posthumously awarded a Lifetime Achievement Award. Cllrs Siobhian Brown and Laura Brennan-Whitefield from South Ayrshire Council and Cllrs Niknam Hussain, Waheed Raja and Raj Khan of Buckinghamshire Council were the winners of the new Collaborative Working Award. Cllr Jenny Laing (Aberdeen City Council) was presented with the coveted Leader of the Year prize for Scotland, in recognition of her guidance of Aberdeen during a tough local lockdown. In England, Cllr Tom Beattie (Corby Borough Council) also took home the prestigious Leader of the Year prize after impressing judges with his outstanding local and national leadership. 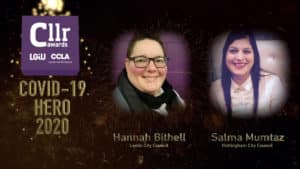 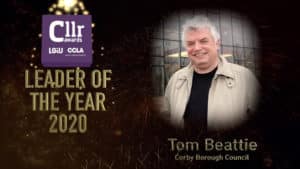 It was a week of celebration after a difficult year for many and an important reminder of the need for strong, community-driven local leadership. Congratulations to all our winners – we look forward to seeing you at the 2021 Cllr Awards!

The full list of winners can now be found here and you can watch the full ceremonies here (England) and here (Scotland). Our press statements on the Awards can be found here.